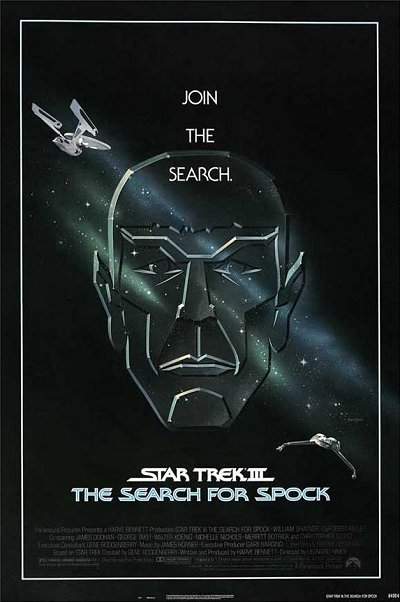 One of the biggest differences between Star Trek III: The Search for Spock and current movie series is that these days films are conceived with the wider franchise firmly in mind. That’s why something like the most recent Star Wars film can finish on such an open ended note, all those threads left dangling so they can be picked up in the next instalment. It’s a neat trick, like a TV show and especially like the old cinema serials ending on a cliffhanger, keeping fans on tenterhooks and hopefully eager for more. No such consideration back in the early 1980s, where the Star Trek films were concerned. This entry’s predecessor, The Wrath of Khan, closed on a bitter-sweet note with the day won but at the expense of a major character who had sacrificed himself for the crew. The moment was effective because Spock was absolutely dead; whatever Leonard Nimoy’s reasons for pulling out of playing the character any longer, dramatically it was a devastating coda and a most satisfying pay-off to a picture that had provided more than its fair share of treats.

But wait! Having unexpectedly enjoyed his time making the film, Nimoy found himself increasingly reticent about leaving the series and, in collusion with director Nicholas Meyer, improvised Spock’s pre-death scene to give the character a ‘resurrection pass’ if they chose to take it, and if the decision was made to carry on with the story beyond this entry. At the time, no one knew if this was the end of the fledgling Trek films, but Wrath of Khan turned a good profit, earned overwhelmingly positive notices, and the goodwill continued when it was later made available to buy on video and sold well. The green light for the third instalment was duly given; Spock’s pass was activated, and Nimoy compensated for his lack of time on the screen (Spock features heavily, but Nimoy himself gives a cameo appearance only) by being handed his first directorial assignment.

The film’s title is pretty much a giveaway for what happens, the Genesis project introduced in Wrath of Khan turning out to be a Deus Ex Machina, not only giving life to a dead planet but also restoring dead things that are left there, principally Spock’s corpse. You can sum up the basic plot in a sentence or two, and so writer Harve Bennett introduced several elements to add tension and meat to the bare bones story. Most sensational is the moment the starship Enterprise itself is destroyed, a fan pleasing set piece within a film featuring so much service to Trekkies that it’s impossible to watch the thing without being at least a little familiar with the lore. To an extent that’s nice, a sign of the series’ growing confidence in its own material, though newcomers would be forgiven their bafflement over, for instance, the critical ‘Pon Farr’ scene, which turns out to be all about sexual awakening. Who knew?

Over the years, The Search for Spock has dated rather badly compared with many of the other episodes. One obvious problem is the low budget, the money available to the production again being considerably less than the amounts lavished on The Motion Picture. In The Wrath of Khan, it mattered little as so much of the action took place on ships’ bridges, but here the focus is on the Genesis planet itself. Mattes and sound stage dressing substitute for location shooting, and the end result is risibly easy to spot. The effects take a knock also, early Industrial Light and Magic work looking fairly shoddy compared with the state of the art, big budget efforts created for Return of the Jedi.

In terms of plotting, The Search for Spock takes a darker world view than the usual optimistic outlook promoted by the Star Trek universe. Genesis, seen very much as a positive development in The Wrath of Khan, is here exposed as a failure, truly bringing planets to life but also accelerating the process exponentially so that its only use is as a weapon, an element rife for being taken advantage of by Christopher Lloyd’s renegade Klingon. The Federation, which represents the future of human exploration into space, is cast as backward thinking and overly bureaucratic, an obstacle for Kirk and his mates to bypass in order to get the job done. All this is done to ramp up the suspense, to stop the heroes getting from A to B in what is otherwise a fairly routine mission that involves picking up the Spock child and transporting him and McCoy – who’s possessed with Spock’s living soul (go with it) – to Vulcan in order to fix them both.

At least the cast is good. By now, all the principals are comfortable with both their roles and their advancement into middle age. I’ve always had a lot of goodwill for William Shatner, who whilst undeniably hammy more often than not hits the right notes. There’s a sense that Kirk is given a fight scene purely because it’s not a proper movie if Kirk doesn’t get to use his fists, but the largely wasted scene in which his son is killed is laden with gravitas thanks purely to Shatner’s emotive playing. DeForest Kelley loses much of McCoy’s traditional sardonic wit as a consequence of being laden with Spock’s memories, but this just gives more exposure to actors who normally support from outside the ‘Holy Trinity’, notably James Doohan and Walter Koenig, who both enjoy great moments and show perfect comic timing. Robin Curtis as Saavik is a weaker link. The part had gone to Kirstie Alley in The Wrath of Khan, who demanded more money to reprise it and so it was duly recast, robbing the Vulcan of all the sass and ambition Alley had brought to the table. Lloyd is good value though, lending his character a forceful violence and unquenchable evil. As for the direction, Nimoy proves that he’s no Meyer. Sure this was his first time, but there are few flourishes in The Search for Spock and it’s all told rather flatly. If there’s a saving grace, then it is that however ordinary Nimoy was in ‘the chair’ he was certainly better than Shatner, who took over for the forgettable fifth instalment.

The Search for Spock is quite good fun in places, when not overladen with solemnity. The Enterprise’s flight from the Federation’s space dock is exciting, and the face-off between Kirk’s crew and the Klingon Bird of Prey has echoes of the classic brinkmanship that made Wrath of Khan such a blast. Many of the finest bits are elevated thanks to James Horner’s score. The late Horner, who would go on to win two Oscars (both for Titanic), composed music that elicited all the wonder and sense of adventure that underpins Star Trek. It’s simply ravishing and it makes a lot more of what’s taking place on the screen than is otherwise deserved. Despite moments, though, The Search for Spock largely obeys the general rule that followed these films – those with the even numbers were nearly always better.