I have wanted to watch Fear in the Night since I first spotted it on the They Shoot Pictures Don’t They list of the best Film Noirs. The draw was a chance to catch an early film role for DeForest Kelley, of course one of the principal actors in Star Trek and someone who I didn’t think I had ever seen outside the Trek universe. Unlike the series’ other stars, William Shatner and Leonard Nimoy, who had notable careers beyond the Starship Enterprise, Kelley seemed tied to his outwardly grumpy, heart of gold healer, though as usual the joke was on me as Kelley came with an enormous CV before he went anywhere near the show. For the most part he’d appeared in Westerns, some that I had indeed watched before, yet there was something especially appealing about this entry. To my mind Kelley has the sort of face that fits Noir like a glove – that haunted expression, those pale blue eyes that to me seemed to have seen so many bad things…

As for the film itself, it’s very near the perfect Noir plot. I have a particular love for stories that fall within the ‘fatalistic nightmare’ sub-genre, the likes of D.O.A. and Scarlet Street where the main character – often someone defined by nothing more than their ordinariness – gets into a heap of trouble, often through no fault of his own and without any easy route of escape. It’s the kind of awful twist of fate that is implied could happen to any of us, though gratefully it’s something we can see being played out on a screen rather than actually taking place, so it comes with an innate sense of relief.

Fear in the Night is adapted from a Cornell Woolrich short story, and follows the misfortunes of Vince Grayson (Kelley), a young man haunted by his vicious dream in which he is killing a man. He’s unable to dismiss it as a nightmare due to being in possession of a strange key and button, along with the mysterious bruises on his throat that suggest he struggled with the man he murdered. Unsettled, Grayson talks to his brother in law, police officer Cliff Herlihy (Paul Kelly), who does all his doubting for him, however a chance visit some days later to a mansion to which the former oddly seems to know the direction turns up evidence of an unsolved dead person. By now, Grayson’s convinced of his own guilt and Herlihy feels the same way. The poor fella turns suicidal, only to be saved by the officer, who then starts piecing together a possible case of hypnosis as the trigger for Grayson’s deed…

From here the film turns into an unravelling of the plot, but it’s at its most interesting when it’s peering into Grayson’s tortured mind, his feelings of culpability and bewilderment over a murder that he seems to have committed, but can’t remember how or why. We glean his thoughts via voiceover, Kelley talking through his sensations as he stares at himself in the mirror or into a middle distance that leads nowhere and provides no answers, and his narration is the stuff of Noir wet dreams. ‘There was danger here,’ he says in a flat voice that only teases at his rising sense of panic. ‘I wanted to turn and run, but I couldn’t. It seemed as if my brain was handcuffed and I had to do what I’d come to do.’ There’s some great, impressionistic filming too. As Grayson’s recalling the tangle of memories and dreams, the camera zooms into his eyes, which are then superimposed with the details of his ‘crime.’

Fear in the Night packs a lot into its 71 minute running time, which makes for a taut and pacily told thriller. Funding was clearly an issue, most of the action taking place across few locations, so it’s pleasing that director Maxwell Shane, his cast and crew, try to make up for the low budget with a narrative that’s designed to disorientate the viewer along with Grayson until the film’s mystery is revealed. The murderous act takes place in a room fit for claustrophobic nightmares, an octagonal-shaped enclosed space in which each panel contains a full-sized mirror. Grayson’s flat, in which he spends much of the film, is small, disconcertingly featureless, helping to give the impression that he’s trapped and there’s nowhere for him to run to.

This was Kelley’s debut appearance on the big screen, and he’s absolutely equal to the demands of the role, appearing passive and helpless to escape the terrible fate that’s apparently in store for him. His job as a bank clerk emphasises his humdrum life, the utter inchangeability of his position that means when he calls in sick he can be replaced instantly. Betty Winters (Kay Scott) takes over his counter, the arrangement she makes of putting  her and Grayson’s name plates together hinting at the future she envisages for them both. It’s left to Kelly’s detective, Herlihy, to play the part of the audience, oscillating between not believing Grayson, to suspecting him and finally resolving to help him out of his predicament. Chain smoking and capable, Herlihy is every inch the redoubtable protagonist. A veteran of Film Noir, Kelly’s wife in the film is played by the even more prolific Ann Doran, another reliable character actor who is notable for putting in more than 500 appaearances on cinema and television.

Shane was a dependable writer of B-movies who occasionally got the opportunity to direct. He remade Fear in the Night nine years later, as Nightmare starring Edward G Robinson. In addition there’s an episode of the radio serial Suspense that adapts the story. Critically, time has been kind to it. Viewed at the time as wholly forgettable, a slightly ridiculous quota quickie, it’s gone on to be appreciated as an artfully told and innovatively filmed exercise in tension. Unfortunately little effort has been taken in restoring the film. It’s now in the public domain. I watched it on Amazon Prime, and had to bear with the poor quality both visually and in terms of sound. It deserves better. Allowing for the patience of the viewer, it’s a rewarding Noir that doesn’t outstay its welcome and weaves a fine mystery.

This post was written as part of the 2019 Noirathon, hosted by the excellent Maddy Loves Her Classic Films. I should visit Maddy’s pages more ofen and I definitely ought to be adding to the collection of entries here on a (much!) more regular basis, so it’s with some gratitude that I have been compelled into taking part. 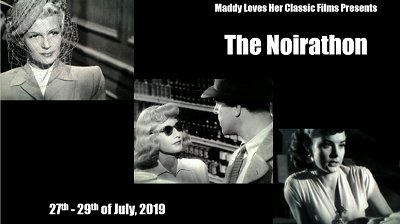