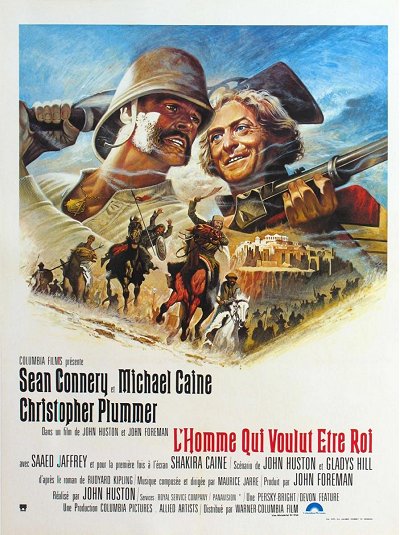 A fantastic decision from the BBC to schedule a proper matinee flick in its early afternoon BBC2 slot. The Man Who Would be King is proper boys’ own stuff, reminiscent in some ways of the oft-screened North-West Frontier and I think a lot more fun. What elevates it is the genius casting of Michael Caine and Sean Connery in its two starring roles, placing the two great Britons together and constantly sparring off each other verbally. They’re great value, so much so that you end up wondering why more people didn’t do this. It isn’t the only film in which the pair share the bill, but unlike A Bridge Too Far, with its massive ensemble cast, this entry has Connery and Caine partnered as two roguish, former British army men, out for adventure and spoils. It’s an almost effortlessly winning combination.

Of course, it wasn’t without a great deal of effort to put this Rudyard Kipling story onto the screen. John Huston had been sitting on the script for decades, eager to make something along the lines of the 1939 classic, Gunga Din, and originally intending to offer the two leads to Clark Gable and Humphrey Bogart. The pair passed away within a few years of each other, and Huston kept offering the roles to the great A-listers of their day, ending up with Robert Redford and Paul Newman in an attempt to riff on the chemistry they’d achieved together on Butch Cassidy and the Sundance Kid. It was Newman who suggested Connery and Caine, using British actors in British parts, which led to the eventual and inspired casting choices.

Caine plays Peachy Carnehan, a former Colour Sergeant based in India, who stays on to seek his fortune and turns to pickpocketing when the need calls for it. A chance encounter puts him face to face with Rudyard Kipling himself (Christopher Plummer), then a journalist with the Northern Star newspaper. Peachy’s friend, Danny Dravot (Connery), is introduced, and the pair explain to Kipling their biggest grift yet – they’re to journey through Afghanistan and cross the Hindu Kush into Kafiristan, a remote land of petty tribes, where they will use their superior technology (rifles) and bluff to set themselves up as kings. Despite Kipling’s misgivings, they set off, encountering bandits on their epic journey as well as the perilous mountain ranges, which nearly claim their lives. Making it into Kafirstan, they find it exactly as they expect to and quickly establish themselves as leaders, winning battle after battle thanks to their military nous. But events take a turn when Danny is shot with an arrow during one skirmish. Unharmed, because the arrow struck a bandolier concealed beneath his uniform, he’s seen as a god by the people and is subsequently hailed as the Son of Sikander, the divine reincarnation of Alexander the Great, the last foreigner to take over these lands. Alexander’s overflowing treasury is made available to the pair, and whilst Peachy views this moment as an opportunity to take their share of the loot and make a run for it, the power goes to Danny’s head and he takes to being worshipped as a deity. The only other person in on the caper is Billy Fish (Saeed Jaffrey), an English speaking Gurkha who made it into Kafiristan when a previous map-making expedition was consumed by an avalanche. It can’t last forever, especially when the populace realises that Danny is in fact a mortal man, and when that happens there’ll be hell to pay.

There’s loads to enjoy here, in Huston’s most purely entertaining film since The African Queen. Whereas his 1951 effort succeeded on the romantic chemistry Bogart and Katharine Hepburn established, this one is more of a Bromance, the friendship between Peachy and Danny the only solid and committed thing they have as everything around them is prey to their immoral gambling. It’s a surprisingly touching relationship. When Danny falls prey to ‘snowblindness’ in the mountains, Peachy refuses to leave him behind, and if they are to die then they resolve it will be together, better that than having to face the future alone. It’s this endearing quality that turns them into unlikely heroes. Their brotherly sense of love aside, they’re both despicable chancers, utterly self-serving, and this aspect becomes more central as the story unfolds and it turns into one of colonial avarice, ignorance of native tradition in foreign lands. In the end it’s this that becomes their undoing. Danny wants to marry a beautiful local girl who just happens to be named Roxanne (the same as Alexander’s Eastern princess) and determines to marry her, even though she’s made it clear she isn’t interested as she fears coupling with a god will kill her. Roxanne’s played by Shakira Caine, the real life wife of Michael Caine.

Caine himself remained a big fan of the film and a great admirer of Huston’s shooting style. He praised the director’s ability to know exactly what he wanted from each shot, which helped to make the time on the set at Pinewood, or on location in France and Morocco, an enjoyable one. There’s certainly something very Kiplingesque about The Man Who Would be King. It rattles along in the grand manner, never dwelling too long on a particular scene or overworking the moral points it wishes to make, so that it can be enjoyed as an adventure tale as well as taking on board the more serious underlying themes. At its heart are the two stars, both at the top of their game, giving every impression of enjoying the time they share on screen and reflecting this in their performances. Trading jokes and laughing heartily at each other’s jokes, it seems a great shame that their natural charisma is undermined by their characters’ greed, but then who doesn’t love a rogue? As for the photography, the film plays like an epic, ravishing matte paintings that fill in for the ancient religious city and thousands of extras giving it a real big screen sweep. It looks amazing.

In preparation for watching Moby Dick, I downloaded Herman Melville’s novel onto my Kindle with the intention of ploughing through it and comparing text with film. Sadly, I’ve only made it to the 10% mark so far, quite enjoying what I’ve read though it’s a tough-going tome in places, pages and pages of nothing much happening yet much in terms of foreboding and whalecraft.

Adapting Melville into a film was always going to be a tall order, though the book’s classic status ensures many have tried. Presumably one of the main problems is the story’s lack of romance, the long passages involving descriptions of life on board the Pequod and the way everything takes place right at the end. John Huston’s 1956 entry is nevertheless a manful effort. The attempt to outline the crew’s relationship with their captain, Ahab, brings to life the occasionally claustrophobic, always mutually dependent world of the nineteenth century whaler. Moby Dick is told from the perspective of Ishmael (Richard Basehart), who’s recounting the tale as the Pequod’s sole survivor. A cypher with the task of describing the characters around him, Ishmael isn’t the most interesting seafarer, but then he’s never meant to be. Much better value are Leo Genn as the Pequod’s first mate, Starbuck, tattooed harpooner Queequeg (Friedrich von Ledebur) and inevitably Ahab himself.

The story opens with the Pequod’s crew steadily assembling in Nantucket. They attend church service before they go, a great scene in which the cameras roams along the pews, picking out plaques dedicated to the dead (all have perished at sea, a warning if ever there was one) before focusing on Orson Welles’s sermon. Welles is as ever brilliant value in his cameo, pontificating from a pulpit that’s dressed up as a masthead – apparently, he took the part in order to fund his own stage version of the book (I always love looking into the reasons for Welles popping up in films; it was always to help finance his own projects).

Soon enough, they’re at sea, searching for whales whilst Ahab glowers in his cabin. Half an hour passes before we get our first proper glimpse of him, all wooden legged and scarred face, played by Gregory Peck. Ahab gets the best speeches in the script (my favourite bit of dialogue heads this entry), driven ever by his desire to get revenge against the enormous white whale, Moby Dick, that took his leg. True to his motivation throughout the story, Ahab clashes with his crew often – they’re in it for profit and have no interest in his vengeance, but he’s the captain and they follow him sullenly, never fully aware of how far he’s prepared to take the men in realising his goal. There’s several marvellous scenes that illustrate the tension – one in which Starbuck prepares for mutiny, another when Ahab refuses to help a boat that’s searching for the captain’s son.

Two aspects stood against Moby Dick, which experienced a troubled shoot and escalating costs. One is the effects work involving the whale. Plenty was invested in getting this right, but Moby often enough looks like what it is – a model – and pre-CGI, it must have been almost impossible to make the thing work. The original model was 75 feet long and floated out to sea, leaving the crew to rely on ‘whale parts’ for the shots where it interacts with actors, and miniatures otherwise. Secondly, Peck’s performance, which earned mixed reactions from audiences used to seeing him as a hero. Generally cast as the romantic lead, Peck toned down his handsome looks with Ahab’s scarring and an unhinged, shouty performance and, whilst there may have been more obvious choices (James Mason springs to mind) he’s actually pretty good, convincing as the captain with terrifying levels of obsession.