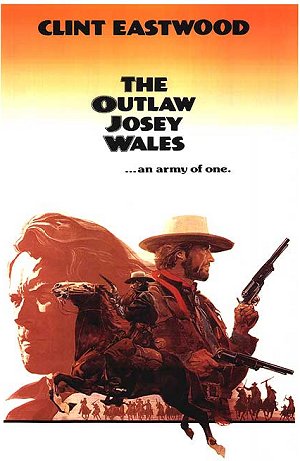 I think I’ll try to tell him the war is over.

I think that of all Clint Eastwood’s directorial efforts, the westerns he helmed may be his greatest achievement. It just seems to me that he got the genre, perhaps as a result of having worked so long in and owing much of his career to westerns. Starting in the latter part of the ‘classical age’ and indeed playing a role in ending it by starring in over 200 episodes of TV’s Rawhide, Clint got to be a major player in early efforts to stretch and subvert it with his Leone gigs and it’s in this spirit that he appears to have approached his own projects.

The Outlaw Josey Wales was his second directed western, following High Plains Drifter, which turned Clint’s now traditional ‘Stranger with no Name’ into a ghostlike, supernatural figure. There’s nothing mysterious about Josey Wales (Eastwood), the southern farmer who swears vengeance against the US soldiers who murder his wife and child, and for good measure burn his house down. Joining a band of Confederate vigilantes, Wales’s spirit of hot revenge remains when his compatriots surrender and that turns out to be a good thing as they’re gunned down after being forced to swear their allegiance by reciting a bastardised Union oath. Betrayed by the band’s former leader, Fletcher (John Vernon), and pursued by the nasty piece of work that killed his family and friends (Bill McKinney), Wales becomes a hunted outlaw.

The scene is set for a chase/revenge thriller, but the film then does an interesting thing. As Wales moves south, he starts picking up a ragtag collection of settlers who see him as someone capable to protecting them. These include Lone Watie (Chief Dan George), an elderly Comanche who puts in an extraordinary, eccentric performance, and sets the tone for all those who follow Wales in being broken, dispossessed and in search of redemption. Ultimately, it’s the eponymous lead character himself who finds peace of a kind, being touched by the gratitude of those he’s helped and their simple wish to settle down and make new lives for themselves. Things aren’t that easy and there’s still unfinished business with the Union pursuers to resolve, but the film ends on a note – albeit an uncertain one – of hope and resolution.

There’s loads to enjoy in Josey Wales, from the ferryman who whistles Union or Confederate tunes depending on who’s paying him, to the main character’s ‘summit meeting’ with Indian chief Ten Bears, where both men appreciate a mutual sense of damage. War overshadows the entire proceeding in a way that’s real and affecting,  and the film’s redemptive note comes across as welcome and slightly profound.