Apologies for this post’s misleading title. There isn’t of course a sequel to the excellent Becket – how could there be? What did happen, however, in one of those lovely, neat bits of timing was a trip to Canterbury I made with my family this week. We went because it was raining on Wednesday morning, another wet day on our one week off together before July, and we agreed to give up the splish-splash north-west and pilgrim our way across and down the country in order to visit the seat of the Church of England.

Needless to say it wasn’t raining in Kent, and Canterbury emerged as a rather lovely place, only really shoehorned into this century thanks to being a University town. The focus of our brief stay was obviously the Cathedral, which you really can’t miss even though we were stopped from visiting on the first night as they were filming a Hollywood production there (no idea what, unfortunately, and if you ask me rather inconsiderate of them not to advise me before I went). 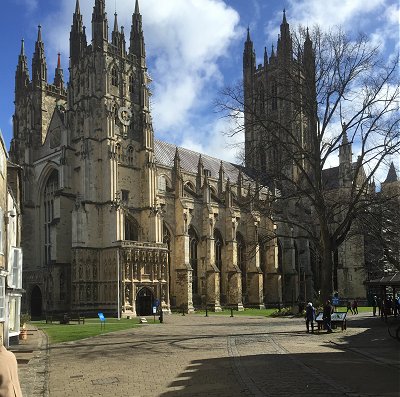 I’ll confess here and now that I’m an inveterate Cathedral visitor, something about those mighty structures that were constructed at a time when buildings so enormous shouldn’t have been possible, and trying to imagine myself in medieval times, awed into submission by their sheer scale when nothing similar existed. Canterbury is of course a special place, given its position and the sheer length of time that a place of worship has been present on its site. From what I can gather, more or less as long as Christianity has existed in England there’s been a church here, which means you’re walking on 1,500 years of significant history. And it’s a fine building, perhaps second only to Ely in my chart of English Cathedrals and wholly capable of inspiring the appropriate dropping of one’s jaw. Even with bits grafted on to the structure over the centuries it’s impressive.

Inside, the main focal point is naturally the bits that involve Thomas Becket. There was something stirring about walking where he no doubt once did, exploring the exact spot in the church where he was martyred, viewing the roll of Archbishops and seeing his name on the list. For good measure there were the tombs of King Henry IV (buried deliberately adjacent to Becket in the Cathedral as the cult around the Saint was at its peak) and Edward the Black Prince here also, but nothing really compares to the Thomas stuff, and the humbling feeling of being somewhere that had paid witness to the same events I had been exploring for this site mere days earlier. Given our journey, it’s almost impossible to picture what people went through to get here in times gone by. I can get some impression from the topography alone, the way we crested a small hill before having our first sight of the place, but England in 2016 is nothing like the forested land it was back then and imagining the trek pilgrims made sounds like a special kind of ardour. 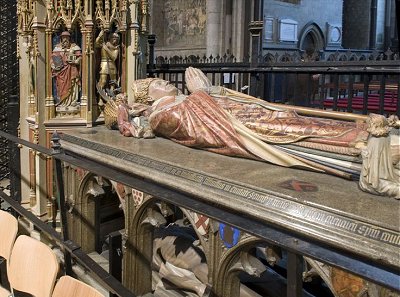 Very much a worthwhile expedition, despite the long journey and the failure of other road users to show any more care for the Highway Code than a ‘screw you, I’m going here’ attitude. Sadly, I didn’t quite have my own Dennis Price moment a la A Canterbury Tale, but I am pleased to have been at last.

In the meantime, this site might be a little quiet over the next few weeks. I’m just taking a bit of a break from it all, though I reserve the right to drop in at any time I please and place a stealth write-up on these pages.

7 Replies to “Becket – the Sequel”