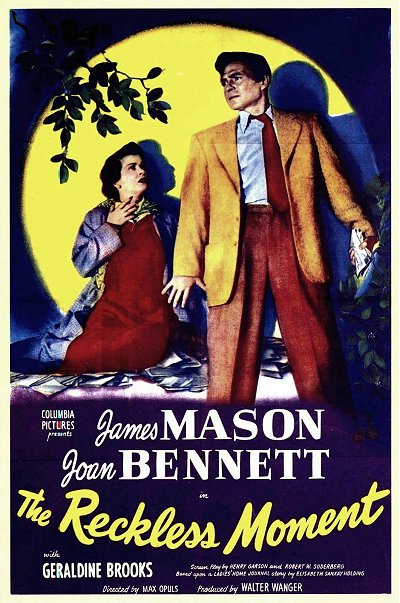 Recently, I’ve taken the opportunity to watch a couple of Max Ophuls’s films from his American period. He reminds me a lot of Douglas Sirk, his fellow German director who came to the USA and, in his work, showed a mirror up to society and found it wanting. There was Caught, Ophuls’s study of the capitalist American dream, Barbara Bel Geddes achieving it when she marries Robert Ryan’s millionaire. It quickly becomes apparent that Ryan’s a rich asshole, a megalomaniac who’s surrounded himself with sycophants on the payroll and, in his eyes, Bel Geddes carries exactly the same status. So she runs away, into the arms of James Mason’s kindly and understanding doctor, and the film’s dilemma becomes one of choosing true happiness on modest means or an empty life of wealth.

Mason’s services were retained for The Reckless Moment, a title that makes better use of his talents as it was frustrating to see an actor of his intensity and range taking on a straight role in Caught. In this entry, the character he plays is complicated and interesting, a blackmailer who falls in love with the victim because she is from a level of society to which he can never aspire. The romantic undertones between him and Joan Bennett are palpable, but I’m not sure ‘romance’ is the appropriate word; instead Mason’s character slips from turning up on her doorstep with the aim of extorting money from her to helping around the house, carrying her groceries and interacting socially with her family. His effort to impress himself on a middle class family is quietly heartbreaking. You wonder what he’s experienced previously to give up on his lot in chasing a clearly lost cause.

And that’s just one element of a great thriller that takes a step into nightmarish Noir territory, presenting viewers with the sort of unresolvable dilemma that keeps the suspense ticking until its close. The central plot hook is familiar territory to Joan Bennett, who starred in The Woman in the Window five years earlier. When not walking around in daring see-through blouses, Bennett’s character became embroiled with Edward G Robinson when the pair accidentally murder someone and then attempt to cover their tracks, something you know will be a hopeless exercise because in these films, crime never pays. Just like in The Reckless Moment, she’s blackmailed for $5,000, five gees, an impossible quandary that feels like the start of a slide into despair and ruin.

The character Bennett plays in The Reckless Moment is very different from her glamorous role in Fritz Lang’s entry. Here she’s Lucia Harper, a respectable housewife living in the quiet Los Angeles suburb of Balboa. It’s a typical 1940s small community, where everyone knows each other and added to that each other’s business. The world is presented as idyllic, though the Harper family, once you peer beneath the surface, is dysfunctional and far from perfect. Mr Harper works away from home, in West Berlin, and won’t be home for Christmas. While Lucia’s son, Tom (Henry O’Neill), is just an over-exuberant teenage lad, her daughter, Geraldine Brooks’s Bea, is a different prospect altogether. She’s chosen art school over going to college and here she has hooked up with older man Ted Darby (Shepperd Strudwick). Believing the age gap between Darby and Bea is intolerable, Lucia goes into the city to tell him to stop seeing her, only to get an insight into his true character when he says it will cost her, five gees to be precise. Lucia refuses and returns home, but Darby follows her and meets Bea in the boathouse. Bea’s been clued in by Lucia about his blackmail attempt and brushes him off, but a tussle ensues and only finishes when she runs off and Darby is inadvertently killed. Early the following morning, Lucia discovers the body and the anchor he’s collapsed upon. You or I might contact the authorities at that point, but instead she tries to spare her daughter and the family’s reputation and dumps the corpse in some nearby swamps.

End of the matter? Yeah, course it is. The body’s discovered and the police start searching, though it’s clear that only a staggering leap of logic would lead them to the Harper’s door. Unwisely though, Darby’s loose and fast lifestyle led him into building a string of debts. He owed money to Nagel and Donnelly (Mason), and in collateral they possess a number of love letters Bea had written to Darby. The letters are incriminating, evidence of the link between the Harper family and Darby, and Donnelly turns up to see Lucia and demand five gees for their return, or he’ll take them to the authorities. Lucia flusters; she doesn’t have that kind of money. Her inability to just get rid of Donnelly is horrifying. When other family members show up and invite him for dinner or some chatter about the ‘old country’ (he’s Irish, like Lucia’s father), two things become transparent – the easy sociability of the household, in which people can only ever be there if they’re friendly, and Lucia’s rising sense of shame. And then something else – Donnelly responds. At first it feels like a ploy, as though he knows he’s an embarrassment to her and plays up to the family’s good-natured attention in order to turn the screw, but as the days pass it transpires his feelings run deeper than that. He buys her a gift when they meet at the shop. He pays and serves coffee to her at a moment of tension. Donnelly steadily becomes the husband figure in her life, ostensibly protecting her from the tougher partner, Nagel (Roy Roberts), but in truth serving as surrogate in the absence of Mr Harper. The lengths he goes to in order to protect her become pivotal when Nagel shows up and he’s forced to decide between the racket and Lucia.

It’s a fascinating study, part affection (Lucia’s a beautiful woman) but almost certainly more to do with the world she represents, a cosy and friendly environment that is obviously alien to the hard knock life he knows. This was early in Mason’s career as an American film star (he was a major British player, with certain wartime titles going on to be among the country’s most profitable at the domestic box office), but already he was establishing himself as a mature actor, lending credibility to his character and the relationship he establishes with Lucia. What could have been a straight melodrama gains heft as the dilemma they share is dealt with, as far as possible, in a relatable, adult fashion.

But it takes two, and Bennett as Lucia is simply electrifying. Having enjoyed some delicious femme fatale roles earlier in the decade (the character she plays in Lang’s Scarlet Street, again opposite Edward G Robinson, ranks among the screen’s ultimate honey traps; it’s very dark) as well as dominating the gossip columns with endless details about her private life, this role was a real gift. As a housewife for whom the family means everything, she readily shoulders responsibility for disposing of Darby’s body, deals exclusively with the blackmail levelled against her daughter (about which Bea knows nothing), maintains a busy and disorganised home, and frets over the household bills. Knowing she has to raise the five gees, she take it upon herself to visit pawn shops and loan offices, the latter almost a comic situation as she’s shoved inside a glass booth, this respectable woman, whilst in other booths we can see little episodes of anonymous financial desperation play out. She does it all practically, just because that’s her role and it what she does. There’s no collapsing under the strain; the only time we see her cry is at the film’s close when she’s been released from her predicament. Incidentally, there’s a great piece on Bennett’s real-life shenanigans over at Shadows and Satin; it’s well worth a read, particularly as it makes a refreshing change to find that she had the last laugh.

The Reckless Moment was not a success upon its release, and there’s a sense of it being hopelessly ahead of its time, its psychology too sophisticated for the audiences to whom it played. Ophuls responded by returning to Europe (he was a Jew who fled his native Germany when the Nazis arrived, and then moved across the Atlantic when his new home in France fell in 1940) and enjoyed arguably his most impressive creative period, certainly the most celebrated. The tendency to sidetrack the four films he directed in America is natural enough, but wrong. The Reckless Moment is brilliant cinema.