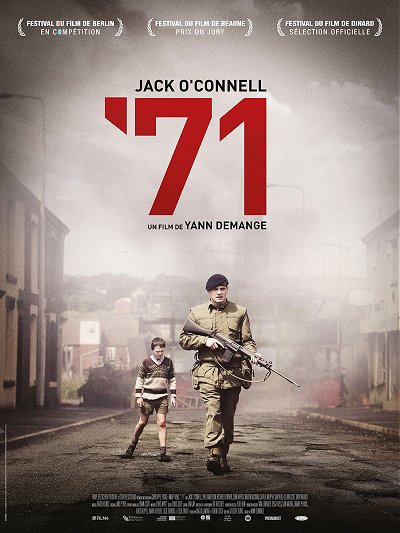 A Freeview TV première that’s showing on Film4, ’71 is a very tense drama set during the Troubles in Belfast, a period of almost unbearable unease thanks to the sheer number of political factions involved and the incapability – at least at the time depicted in the film – of the small British army to handle itself within a hostile environment. There’s an element of confusion over who can be trusted, the shifting of allegiances that seems to turn on single events, and this environment adds to the film’s overall tone of disorientation. Into this mix is tossed Gary Hook (Jack O’Connell), a young private who gets cut off from his unit and left to fend for himself. As local Nationalists try to find and kill him, and the army just tries to find him, Hook is stuck on the back streets, terrified and bewildered, and much of the story tracks his efforts to get back to base.

Viewers are invited to watch ’71 as either a political drama or a thriller, though it works better as the latter, the events at their dizzying finest as the camera tracks Hook scrambling forlornly for safety. O’Connell, increasingly established as a rising star when he featured in this, is fantastic in the lead role. Early scenes show him larking around with his little brother, who’s in a care home, the antics of the pair suggesting Hook is little more than a child himself, albeit one with a gun as he enlists with the army. His character is never portrayed as a hero, and rightly so. Hook gets lost, panics, has strokes of good and bad luck, is badly hurt, and becomes lucky to survive. His first slice of poor fortune is to be sent to Northern Ireland rather than West Germany. It’s clear the army is out of its depth, pushing raw recruits like Hook and his comrades into the scene of a street riot, the unit led by a typical posh boy (Sam Reid) who has as little clue as anyone about how to handle the situation.

Overwhelmed by the sheer weight of the people closing in on them, the unit departs quickly, leaving Hook and a comrade behind, the latter shot dead simply because he’s confronted by a young man (Martin McCann) with a gun in his hand. Hook bolts. The man, Haggerty, chases, loses him, and takes to the streets with Quinn (Killian Scott) and a boy called Sean (Barry Keoghan) in a car, searching for the lost soldier. They represent a more youthful and militant branch of the IRA, incessantly violent, and in conflict with older heads represented by Boyle (David Wilmot) who’s in contact with the British counter insurgency unit, which has a typically grizzled and jaded Sean Harris at its head. All are looking for Hook, who makes friends with a Loyalist boy, only to find the pub he’s taken to blown up thanks to a makeshift bomb going off. By now seriously injured, he’s picked up by a Catholic ex-army medic, Eamon (Richard Dormer), who does his best to repair the damage and then contacts Boyle to help get him back to his barracks. But Boyle’s being tracked by the younger men, who converge on Hook’s position, forcing him back out into the open.

’71 was directed by Yann Demange, better known for his work in television and relishing the opportunity to make a sharp thriller. Sheffield was chosen for filming as it looks more like the downtrodden Belfast streets of the early 1970s, most of which have since been pulled down. The washed out palette adds to the sense of dourness, a poverty stricken and desperate community that’s at war with itself. Kids play in the streets, mess around with fire. Guns are stored beneath the floorboards of bedrooms. Much of the shooting is done using a handheld camera, as though audience members are running alongside Hook, adding a kinetic and fast-paced energy to the action. It’s as good a chase scene as they get.

The film’s attempt to grasp humanity emphasises the violent showdown between Hook and Haggerty, a sequence that ends with the two holding hands as one of them dies, sharing sympathy even though they’re enemies. There’s no attempt to highlight anyone as a villain or hero, just people with goals and jobs to do. The only ‘good guy’ is Eamon, and even he’s motivated by a mixture of fear and cynicism, the doubts in his mind teased out by Dormer’s great performance. Harris is good also, the man who can see the big picture but with the knowledge that there’s little chance he will be able to influence it. It’s such an authentic performance that you can imagine him walking straight off the actual streets of Belfast and onto the set. And then there’s O’Connell, carrying ’71’s energy as he continually tries to evade danger. There’s a reason he’s so highly regarded. He’s electrifying. As is the film itself, which stuffs swatches of authenticity and action into its running time to produce a mix that is quite intoxicating.