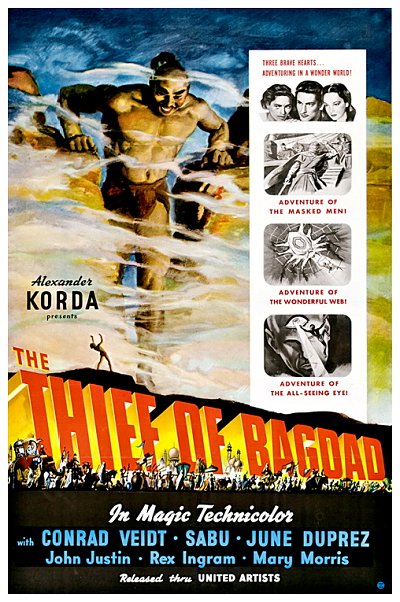 I always have time for fantasy cinema, in particular the kind of gentle, non-cynical fun made during the 1930s by people who seemed to view the big screen as a repository for all manner of simple treats and visual delights. The classics of this nature that immediately spring to mind are The Wizard of Oz, The Adventures of Robin Hood and today’s entry, 1940’s The Thief of Bagdad. For a time, they stopped making films like this – the Second World War got in the way and left Hollywood reflecting the jaded, gritty realistic mood of the time, without room for the sort of ‘Old World innocence’ represented here.

The aim of the film is good old fashioned fun, and on that note The Thief of Bagdad delivers. Based loosely on stories from One Thousand and One Nights, it tells of some unspecified time long ago in the Middle East. A blind man (John Justin) begs for alms on the streets of Baghdad, his faithful dog at his feet. Recounting the tale of his unhappy life, the man reveals himself to be none other than King Ahmad, tricked into losing his throne by his duplicitous court vizier Jaffar (Conrad Veidt). Believed dead, Ahmad plans to reclaim it and recruits the help of a nimble young thief, Abu (Sabu). Journeying to Basra, he then falls in love with a beautiful young princess (June Duprez), the daughter of the Sultan (Miles Malleson). But she’s been promised to Jaffar, and when the pair confront each other the vizier robs Ahmad of his sight and transforms Abu into a dog, a spell that can only be broken once Jaffar holds the princess in his arms. In overcoming Jaffar, getting the princess and the throne back, Ahmad and Abu will undergo a series of adventures, taking in flying horses, genies in bottles, magic carpets and a famed jewel that’s known as the all-seeing eye.

It’s a confection, with its largely British cast playing Asian characters and matte paintings filling in for the walls of Baghdad and Basra, and it’s beautifully realised. The special effects, whilst primitive by modern standards, are rather wonderful and charming, the ambition to depict a massive genie soaring through the air, the Sultan riding above the heads of his awestruck people on a horse that can somehow fly, Abu dwarfed within a massive Oriental temple. The film has the good sense to pace itself very quickly, swathes of story packed into a running time of 106 minutes so that the action races from one scene to another, keeping viewers entertained with the tos and fros of the unfolding epic. It’s blessed with some great performances, beginning with Veidt as the villainous Jaffar. The German was a titan of silent cinema, playing iconic roles during the Expressionist era and fully capable of packing meaning into simple gestures. The scene where he blinds Ahmad is all slight of hand and malevolent stares, and it’s all the scarier because Veidt looks as though he can do almost anything just by willing it so. His cruelty is juxtaposed by the youthful enthusiasm of Sabu, the Indian actor who was employed again and again in just this kind of role. While Ahmad laments what he’s lost, Abu does most of the work in restoring him, coming across the Genie (Rex Ingram) and fetching the all-seeing eye. The bits where he’s telling the Genie what to do, reminding him that he’s in charge, as the magical spirit towers over him, are great stuff because both actors play it straight, packed with personality as uneasy and temporary allies.

Various names are credited with directing The Thief of Bagdad, the most famous of these being Michael Powell. The real creative force, however, was Alexander Korda, the Hungarian emigre who became one of the biggest noises in the British film industry and took a break from making pictures about colonial heroics with this recreation of the 1924 entry starring Douglas Fairbanks. Along with the use of sound and colour (gorgeous use of colour, incidentally; it’s a beautiful looking piece of work), it chopped away much of the earlier film’s bloated length and split the main character into two to good effect. Malleson, along with his major supporting role, was also responsible for the screenplay, and wrote for himself the part of the Sultan as a foolish man-child obsessed with toys and inventions. At a time in history when the Islamic world was credited with advancing knowledge of science and mathematics, the Sultan is in a unique position to be surrounded by objects that might have been perceived as magic. The sense of rousing fun is complemented perfectly by Miklos Rozsa’s energetic score.

What makes The Thief of Bagdad great is its air of wonder, an effort to bring impossible things to the screen just to entertain audiences mired in the reality of a world cascading into conflict. It’s impossible to knock the film’s joyous escapism, the aim to leave your troubles outside and simply be entertained for a time. It was released in 1940, as Europe was fully engaged in war,. indeed the film had to be completed in Hollywood and used the Grand Canyon for some of its mountain-based sequences. I think it’s marvellous, taking in countless leaps of imagination within a chocolate box fantasy world that never loses its charm.