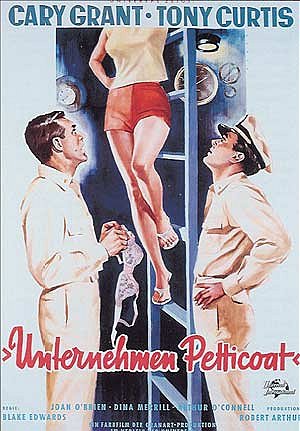 Here’s the first of a Cary Grant double bill, celebrating one of the most famous and best loved Hollywood movie stars of all time by looking at two quite difference pictures. Today’s is Operation Petticoat, a 1959 comedy made when Archibald Alexander Leach’s attachment to a project pretty much guaranteed box office and audiences knew just what they were getting from him.

Operation Petticoat is classic Saturday afternoon matinee fare; it’s likely that viewers of my generation caught it on a BBC2 weekend slot. The film’s good natured, amiable and never outstays its welcome. Despite being longer than two hours, it doesn’t feel like it; I could have handled more. Perhaps the comic potential of a premise that pairs Grant with Tony Curtis was just too good; add into the mix an early directorial outing for Blake Edwards, to whom I’ll always be grateful for the Pink Panther films, but whose work took on a definite ‘coasting’ quality in later years. There’s little of that here. It isn’t that Operation Petticoat is in any way brilliant, profound or has much to say about the human condition, more that there’s nothing wrong with whiling away a pleasant two hours in good company and that’s what this film amounts to. It was a big hit with the public, third only to Ben-Hur and Psycho at that year’s box office, which isn’t bad company to keep.

Grant plays Lieutenant Commander Sherman, captain of the US submarine, the Sea Tiger. It’s December 1941; a Japanese air raid damages the Sea Tiger, leaving it ready for scrapping and the Commodore transferring Sherman’s crew elsewhere. Feeling sorry for the already discarded submarine, Sherman asks to make an effort to repair it with the help of any available crew he can find, and is also assigned Lieutenant Nick Holden (Curtis). Whereas Grant’s character is more or less a straightforward navy man, Holden is a grifter. Given the wide-encompassing title of Supply Officer, Holden scrounges, borrows and steals items in order to patch the submarine together (and keep himself in a certain style), and then they’re off, making for the nearest dockyard with an interesting array of smoke belches and noises accompanying every knot achieved. At a nearby island, Holden picks up a bevvy of female military nurses to catch a lift with the crew, causing mayhem among the all-male complement and consternation to Sherman, who finds his ordered world beginning to crash around his ears. Everything that can go wrong does go wrong. Attempting to give the Sea Tiger a fresh coat of paint, the crew are forced to improvise with the undercoat and turn it pink, and then a fresh Japanese attack forces it to flee before the regulation grey can be applied. At one point, Sherman spies an enemy tanker he can torpedo, a first sinking for his sub, only one of the ladies accidentally knocks the trigger as it’s being positioned and all they hit is a truck on the shore.

There’s a certain ‘old world’ mentality to the film, especially when it comes to the objectification of women. Their presence on the Sea Tiger is seen by most of the crew as giving them something to ogle, whilst Sherman is compelled to make a new rule about how they carry themselves when walking down the submarine’s narrow corridors in case they find themselves in close proximity to Dolores Crandall’s (Joan O’Brien) generous assets.

But mostly, it’s just good fun, the slight sense of peril that comes with being a lonely (pink) submarine traversing mainly enemy waters watered down in place of comic moments, which Edwards mines to frequently delightful effect. Grant plays down his usual leading role to portray the largely straight man to Curtis’s loveable rogue, all crumpled dignity and world weariness, whilst the younger actor plunders the impish repertoire of Grant’s own early performances in producing his own. Operation Petticoat was a big earner for the leading man. Its budget was escalated and colour film preferred once he came on board, and his decision to take a share of the profits landed him something around the $3 million mark once it became a success.

Though some of the action scenes made good use of models, real US Navy submarines were used in the filming, including the USS Balao, which bore the Sea Tiger’s pink paint job. The plot took in a number of real life incidents; the torpedoing of the truck was based on an actual attack on Minami Daito in which a bus was swept into a harbour when the dock it stood on was hit.

Operation Petticoat gets by on a good deal of charm, a couple of great performances and some genuinely funny moments. It also bypasses any sense of reality by finishing with the now Admiral Sherman offering Holden the command of a brand new atomic submarine, presumably a reward for his quick thinking and ingenuity. Honestly though, would you trust your nuclear missiles with this man?