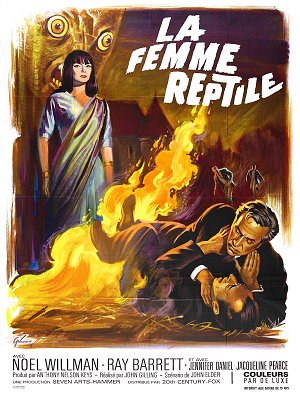 The economical approach to film making taken by Hammer Studios was the stuff of legend. The Reptile started life as a support feature to the more prestigious Rasputin: the Mad Monk, and was produced back to back with The Plague of the Zombies (itself made as the B-picture to Dracula: Prince of Darkness), the two films sharing the sets, cast and crew in a supreme attempt to cut costs. Ironically, there are many who feel that the supports are better than their main features. It’s for certain that, of the four mentioned here, The Plague of the Zombies was and remains an outright classic. But The Reptile, probably the least known of those mentioned, is no churned out quickie, despite appearing to be exactly that.

It takes place in Cornwall, some time around the turn of the twentieth century. A man walks across the moors to his home, where he finds a note imploring him to come to the palatial Franklyn house. He does. Whilst exploring the dark corridors for some sign of humanity, he’s suddenly attacked by something that leaps out from the shadows, leaving him with a blackened face and frothing mouth, dying from what looks like the bite of a king cobra. The killing is watched by an aghast Dr Franklyn (Noel Willman), along with Indian servant, the Malay (Marne Maitland), who removes the body to the village cemetery and dumps it there. Clearly, this isn’t the first mysterious death this community has seen. No one can explain it, not least pub landlord Tom (Michael Ripper), or eccentric local resident ‘Mad’ Peter (John Laurie). What they can do is warn visitors from staying around, which is what they try to do with the dead man’s brother, Harry Spalding (Ray Barrett) and his wife Valerie (Jennifer Daniel), who are bequeathed the house.

Spalding is made of sterner stuff and insists on making a go of settling down in the area, despite Tom and Peter’s concerns, along with the way he’s shunned by the villagers. When Peter succumbs to the mysterious illness, Spalding finds himself increasingly in the company of Dr Franklyn, while Valerie befriends his daughter, Anna (Jacqueline Pearce), a lovely yet sad girl who’s in a constant state of near terror. It becomes apparent that the troubles being experienced have their origins in the doctor’s home, something to do with Franklyn’s time spent in India and a curse that has followed him back to England.

So far, so generic, and it would be easy to dismiss The Reptile as a knocked out frightener, short on cash and long on the usual stuff – random killings, a horrific mystery, scared, ignorant locals. What it does have, however, is atmosphere. Bags of it. If the film seems to fail a little when the Franlyn secrets are unraveled, then that’s partly because everything leading up to this point is really quite good. There’s a great sense of closing in doom to the village, its classic Cornish mist, rundown houses and a spooky graveyard at the centre, as though death is the very focal point of the community. Hammer veteran John Gilling directs it as a slow burning thriller, punctuating the mood every so often with a grisly death but letting the tone focus on the contrast between the melancholy locale and its urbane newcomers, proactive and determined to get to the heart of the matter.

Also worth mentioning is the dark underbelly of Britain’s empire building, the possibility that Englanders abroad come into contact with native myths and superstitions and bring back more than they bargained for. The character of the Malay, who barely speaks but continually seems to be watching from the corner of the frame, is fascinating, not least for his status as servant yet the fact he appears to have the upper hand on Franklyn and complete control over Anna.

It’s a great cast. Barrett and Daniel are fine as the outsiders, punctuating their otherworldliness within a superstitious and insular part of the realm. There’s an authentic air of ruin, both morally and physically, to Willman’s performance, the facts of his time in India never fully explained though one can guess, and the tortured relationship he has with Anna just raises more questions. The brilliantly tense sitar scene, set during dinner at the Franklyn’s in a room heated way beyond necessary, where the almost unfairly beautiful Pearce strums away to the rising consternation of her father, the characters glaring intently at each other, exposes levels of exoticism and sexuality that suggest a far more complicated back story than the film ever reveals. Rounding off the cast are an excellent unhinged Laurie, soon to achieve stardom as Private ‘We’re doomed!’ Frazer in Dad’s Army, and the reliable Ripper, the supporting actor’s supporting actor in so many Hammer productions. It’s good to see Ripper get a larger presence than he normally enjoys.

If The Reptile has a weakness, it’s in the denouement, when the mystery has been solved and the the eponymous monster emerges. Though it features a rather striking visual shock when Franklyn goes to the bed of his daughter only to find what appears to be skin without a body inside, the creature’s reveal is more than a little underwhelming, even more so by current standards. I’ve deliberately chosen a poster that avoids an emphasis on the reptile, because I’d rather focus on the story rather than the disappointing make-up. It’s this that exposes the good sense shown by Gilling in under-lighting many of his scenes, ensuring the reptile is shown as often as possible as a creature of the shadows. Its demise is similarly unfulfilling and dealt with a little too quickly.

That aside, The Reptile is a cracking little thriller, no classic but an underrated gem. Sadly, it’s also been unappreciated by its restorers, with my copy of the film – part of the Ultimate Hammer boxset – suffering from colour loss and clarity issues. It deserves better.