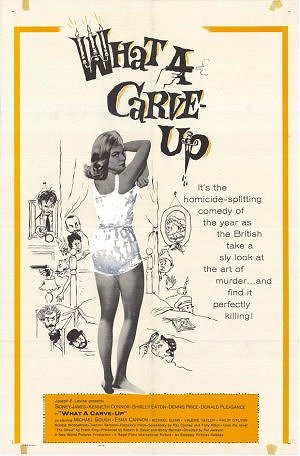 The best novel I’ve ever read is What a Carve Up! by Jonathan Coe. It’s a tale about the horrible people who benefited most from Thatcher’s Britain, all condensed into one deliciously odious family, and chronicled by the man who’s writing a book about them. The story parallels, to an extent, a film the writer remembers from his childhood, the broad British comedy What a Carve Up! (or No Place Like Homicide! as it was oddly titled in the USA, though it’s nice to see the exclamation mark was retained) and it’s for that reason I tracked down the DVD some years ago and have watched it numerous times since.

The film has none of the book’s depth and meaning and is, as the novel’s narrator understands, nothing more than a light farce. The fact that the events in the book start to echo those in the film just adds to the dramatic irony, and of course have just as much of a mixed fortune at the end. But just because 1961’s What a Carve Up! is an easy sub-ninety minutes of pseudo-Carry On comedy doesn’t make it bad. It turns out to be very good fun, albeit containing absolutely no substance and played entirely for laughs.

It started life as a crime novel by 1928 British pulp fiction writer, Frank King, called The Ghoul, which was filmed five years later in a Boris Karloff feature. Made as a horror feature, when it came to be redone in 1961 it was converted into a broad comedy starring Sidney James and Kenneth Connor, with even less of the source material’s contents retained.

Connor is Ernie Broughton, a proof reader of mystery paperbacks. He finds out from a mysterious solicitor, Everett Sloane (Donald Pleasence), that his rich uncle has died and he’s to go to Yorkshire in order to be present for the reading of the will, so off he travels with his friend Syd (James) in tow. When he arrives, he finds the entire family assembled, and a grotesque, greedy bunch they are. Dennis Price plays his hard drinking cousin, Guy, and Michael Gwynn the demented Malcolm. Esma Cannon is Aunt Emily, whose mind is stuck in 1914. There’s also Shirley Eaton, who takes on the role of Uncle Gabriel’s former nurse, Linda. Hearing the will reading, they learn that they’ve been left precisely nothing, with the exception of Linda who has bequeathed some medical supplies. And then one of them is found dead.

Ernie is warned by the house butler (Michael Gough) that it’s just the beginning, and sure enough further family members are dispatched over the course of a night during which they’re all trapped in the house during a typically stormy night, all methods of communication down and the village unreachable due to all the nearby bogs. Ernie is suspected, then he isn’t. The house is discovered to be riddled with secret passages. Doubts emerge over whether Gabriel is dead at all, and if he isn’t then one of the characters is working with him to perform the murders.

The actors all play up to the stereotypes they developed over the course of their careers. No one did nervousness for comic effect like Kenneth Connor and he brings all his jumpy, gibbering shtick to the film as the anxious Ernie, getting steadily more frantic throughout. As his more hard-headed friend, James gets the best gags and reins in the lewdness that would define him more in later years. Price plays the posh gentleman that he did so well, and then there’s Shirley Eaton, undeniably lovely as Ernie’s unrequited love interest and in the picture for no better reason than to provide one (an uncredited Adam Faith pops up right at the end as her boyfriend). The film’s ominous overtones are provided by Donald Pleasence, of course, leaving me to wonder if there was ever a time when he didn’t come across in his roles as creepy, middle aged and softly spoken. He’s introduced as he walks up the stairs to Ernie and Syd’s flat, moving very slowly, deliberately and in complete silence, staring straight at the camera, which sets the uneasy tone for his character instantly.

What a Carve Up! is an easy film to enjoy, briskly weaving its story and doing a great job of setting up the house as a place of suspense and mystery, filled with dark recesses and bookshelves that can be opened to reveal a passage to surprise locations. The sinister air it generates is subservient always to the laughs, blowing apart the atmosphere in favour of pratfalls and funny likes, which usually hit the mark.