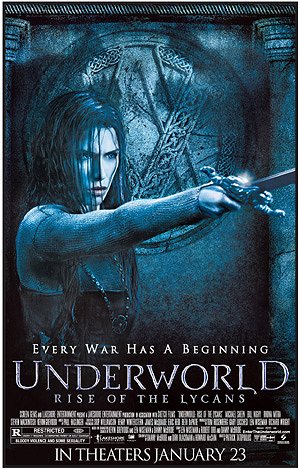 The Underworld franchise is contained within that strange hinterland of mid-budget film works that nobody especially loves yet make enough money to guarantee sequels, a bit like the Resident Evil flicks that keep appearing, whether you want them to or not. Before buying the boxset holding all four instalments, I had seen each one, always at home, late at night, having had a few and not each time obtaining them by fair means. They’re okay. There’s little pretence that they started as a pet project for action director Len Wiseman to cast his wife, the English actor Kate Beckinsale, as a vampire in skin tight leather outfits, cavorting around the streets and sewers of a modern cityscape in search of werewolves to smite. and you are either on board with that or you aren’t.

The first film held the conceit that the centuries long war between the vampires and werewolves – known as lycans – threw up misguided loyalties. Bill Nighy, the haughty vampire leader, turned out to be a villain, whereas it was Lucian (Michael Sheen) who was actually all right, much to Beckinsale’s chagrin, who had once blindly followed the former only to have her world turned upside down by the film’s close. The second advanced the mythology a little further whilst plunging its bigger budget into snappier special effects and more dazzling action sequences, but for the third instalment, Underworld: Rise of the Lycans, without Wiseman or Beckinsale’s involvement (the latter provides some narration), it was decided that they’d go for an origin story, explaining the background to the conflict. Again, your choice whether to find this sort of thing interesting, or a big waste of everyone’s time.

These films were always decent enough for an undemanding late night watch, but this one turns out to be the best, perhaps because the medieval setting works so well for these characters of mythology. You don’t need to care for the story or the characters to enjoy the eternal tale of maltreated good against unashamed evil, and that’s exactly the tale served up by Underworld: Rise of the Lycans. It tells how Viktor (Nighy) is the leader of a vampire coven in some dusky European locale, and one day in his fight against the savage lycans comes across a human baby that’s been born of a werewolf. Fighting his natural instinct, Viktor takes in the child, names him Lucian and watches him grow into a strong and fierce warrior. Perturbed by the potential threat Lucian poses to his kind, Viktor places him in a yoke that prevents him from transforming into a wolfman, whilst making him assault other humans in order to create a servant class. Only, Lucian dreams of freedom, and freedom with Viktor’s daughter, Sonja (Rhona Mitra), with whom he’s involved in a passionate, illicit love affair. As tensions rise and Lucian develops into a charismatic leader of the lycan underclass, Sonja’s decision to win him his liberty comes with a fateful toll and Viktor’s despotic malevolence has awful repercussions for all concerned.

Bill Nighy has always been able to add value as villains, often heavily made up, baroque baddies, whether Davy Jones in the Pirates of the Caribbean movies or Naberius in the execrable I, Frankenstein. But it’s Michael Sheen who really owns the film. Better known for his talent at mimicking real-life figures like Brian Clough (The Damned United), David Frost (Frost/Nixon), and Tony Blair in various adaptations, he turns in a muscular performance here, adding real dramatic heft to what is essentially a silly story. He’s beaten, scourged, watches Sonja suffer, imprisoned and impaled, and with each blow makes the viewer really feel his pain.

First time director, Patrick Tatopoulus, makes good use of the New Zealand location shooting to create an untainted forest environment from the Middle Ages, often shot at night to bring the bare winter trees to eerie life, casting dark shadows over the landscape. The darkness helps with the special effects, ensuring those poor sods dressed in werewolf outfits never look so much like men in daft costumes as they could. Considering the production cost $35 million, it never looks cheap, the transformation sequences kept to a merciful minimum and relying instead on glares of dark intent between Lucian and his captors.

As this set a millennia ago, the endless machine gun fire of the first two films (which, naturally, had no effect on the undead) is no more, and instead we get swords and arrows, both of which have a devastating impact on their targets. The fact we see vampires and lycan alike dying in droves gives the film a sense of weight that the others lack. Strangely, it’s all the better for the lack of a Beckinsale upon whom to lavish lascivious close-up shots.

Underworld: Rise of the Lycans: ***