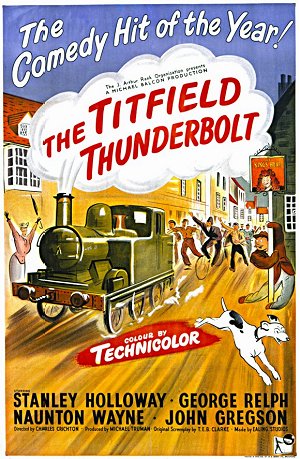 The Titfield Thunderbolt takes place in a fantasy 1950s English village, a semi-rural paradise of sunny days, gentle breezes, cricket matches, girls in summer dresses and where everybody knows your name. The plot is equally amiable. Faced with the closure of their local railway line connecting Titfield with Mallingford, the villagers take it amongst themselves to save it. They’re faced with the issues of antiquated stock and the rival bus company that looks forward to an upturn in business; on their side is a genial, frequently gassed and very eccentric millionaire (Stanley Holloway) who is persuaded to invest in the railway once he learns the train is exempt from licensing laws.

It’s a lovely little ode to gentler times, over in 80 minutes and evoking a long-lost England that you can imagine was in John Major’s head back when he was attempting to drive through his nostalgia-fuelled Back to Basics campaign. Readers with memories of the British political scene during the 1990s will recall this with something approaching fondness. At the time, the governing Conservative Party was rocked by a series of scandals, sleazy stories that included the unedifying image of Culture Secretary David Mellor having intimate relations with an actress whilst wearing his Chelsea kit. Major’s wish was to bring some old-fashioned values back to the country, a nice effort that was woefully out of touch with reality and real issues of the time, and there’s some comparative fun to be had with watching a film like The Titfield Thunderbolt whilst the all too awful troubles of the world are kept loosely at bay.

The comedies produced by Ealing Studios from 1947 to 1957 always ran close to being wistful, whimsical affairs. Moderate yarns all told, even darker subjects of murder in the likes of Kind Hearts and Coronets and The Ladykillers were played lightly, a sense of playful irony sidestepping the grimmer narrative territory into which the films might have fallen. What those two did have, however, was tension, the natural suspense generated by stories in which human beings are facing peril, however mildly they’re told, and that’s something missing from The Titfield Thunderbolt. Added to that is the lack of appeal to the masses, which a film like Passport to Pimlico generated well enough by producing a tale for bombed out, post-war Britons to enjoy and even feel some empathy with. Here, you imagine the ordinary commuter feeling a slight nostalgic regret for the disappearance of the railway line, but hey, if there’s a bus service that can get me to work instead… The challenge of maintaining the line falls to Titfield’s old school leaders, the local vicar (George Relph) and squire (John Gregson) offering their services, whilst Holloway puts up the cash and props up the bar.

Given a month’s trial period to try and keep the line running, the village bands together in the attempt, drafting in the experience of former railway worker Hugh Griffiths, who passes an itinerant lifestyle in his home fashioned from an abandoned train carriage. Opposing them are the bus company villains, who try such dastardly schemes as blocking the track with a lorry laden with rocks in order to delay the service. Ultimately, they sabotage the engine itself, which leads to the villagers borrowing the antique Thunderbolt from a museum so that they can maintain a working service on the day of the government inspection. Sidney James is also on hand as a gruff steamroller driver, whilst onetime Caldicott, Naunton Wayne, turns up as a lawyer who represents the typical user of the line.

Despite the film’s parochial attitude, it’s a mild delight. Filmed in Technicolor by Ealing veteran Charles Crichton (who was responsible for the excellent The Lavender Hill Mob), the green and pleasant land through which the Thunderbolt runs is really quite gorgeous, all picture postcard villages and grazing animals wandering by the tracks. It’s an image of England that might never have existed in reality, the sort you imagine American tourists demanding to experience when they turn up, but it’s very lovely and the backdrop for an easily digestible yarn in which plucky villagers stick it gently to the man. It comes with a deeper level of irony; a decade after it was released, the Beeching Cuts were instigated following a full investigation into the state of Britain’s railways. With road transport becoming increasingly popular, many of the country’s rail services were viewed as unnecessary and subsequently axed, calling an end to the vast network of train services that used to criss-cross the land. There’s little doubt that the fictional Titfield-Mallingford line, which survived the threatened closure thanks to the will of the people, would have wound up a forgotten victim of Beeching’s ruthless cuts.