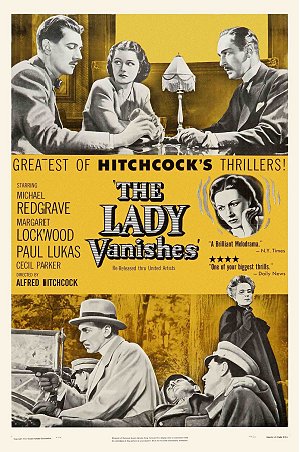 A library of Alfred Hitchcock thrillers has made its way into the Christmas schedules (two of which will be covered here), and BBC4 have chosen The Lady Vanishes for a primetime slot on the big day itself. A good thing too. With the possible exception of The 39 Steps, it’s the peak of Hitchcock’s career as a British-based director and makes for wonderful entertainment.

As with many of the best Hitchcocks, the success of The Lady Vanishes pivots on a very simple plot twist. A young woman, Iris Henderson (Margaret Lockwood) is travelling on a train that’s crossing Europe. Her companion is a genial middle-aged lady, Miss Froy (Dame May Whitty), who disappears after Iris has had a nap. Asking after her whereabouts, Iris is told by her fellow travellers that there was no lady and she must have imagined her entire existence. Having received a blow to the head before joining the train, there are grounds to suggest that may have been exactly the case, particularly as the eminent Doctor Hartz (Paul Lukas) indicates there might be psychological reasons for her ‘creating’ Miss Froy. But Iris isn’t convinced and sets about trying to prove that the lady was on the train; in this she’s helped by a raffish English musicologist, Gilbert (Michael Redgrave).

That’s the central storyline, however there’s so much more to The Lady Vanishes. Iris has come across Gilbert before, when he disturbs her sleep in the hotel where they’re both staying. He’s a cad, a charming cad but a cad all the same, and his offer to assist her on the train carries a delicious undertone of dislike and irritation. There are strong hints that Miss Froy’s disappearance might have something to do with areas of Europe through which they’re travelling falling under Fascist control, suggesting the plain looking lady might be an unlikely secret agent for the British secret services, and that certain passengers on the train may be working for countries that were quickly becoming enemies. Cecil Parker and Linden Travers play fellow travellers Mr and Mrs Todhunter, only they’re an eloping couple, fleeing from their marriages to be together. The pair’s arguments about the need to be discrete and their fluctuating levels of devotion to each other have them making decisions about Miss Froy’s disappearance that help the plot move along.

Best of all, finding great popularity with British audiences and remaining a big draw for the film, are Basil Radford and Naunton Wayne as English tourists Charters and Caldicott. Inserted purely for comedy purposes, the pair are used to poke fun at typically ignorant English attitudes to the dangers of the time; while Europe is collapsing into war and a lady has just gone missing on the train, their only interest is the England Test Match taking place in Manchester and their desire to make it back in time for the final day. Radford and Wayne were such a hit with the public that Charters and Caldicott would go on to appear in a number of further movies; the actors played a very similar pair of characters (obsessed with Golf rather than Cricket) in the later Dead of Night.

Redgrave and Lockwood were both very much up and coming talents at the time, indeed this is the former’s earliest screen credit after some distinguished work in theatre. As thrown together sleuths they have real chemistry together, matching the growing attraction that develops between their characters as the sense of peril rises and they find themselves increasingly depending on each other. The dialogue crackles also. The Lady Vanishes was an unusual Hitchcock film for the relative lack of involvement the director had in the screenplay. Known for working on treatments at their earliest stages as part of pre-production, in this instance he pretty much stuck with the script handed to him by British writers Sidney Gilliat and Frank Launder, who themselves channelled the source novel by Ethel Lina White, considering the plot to be ready made for a screen adaptation.

The Lady Vanishes starts relatively gently, taking time to introduce its characters and appearing very light in tone. The levels of suspense, however, increases all the while, Lukas’s Doctor emerging as a villain along with various passengers to the extent that Gilbert and Iris have no idea how to tell friend from foe. There’s enough going on to tease at complicated back stories from even minor characters, such as the nun looking after Hartz’s completely bandaged patient who is discovered to be wearing high heels.

A major success upon its release for Gainsborough and Hitchcock, The Lady Vanishes landed him with various awards, including the Best Director accolade from the New York Film Critics.  It helped him to negotiate the best possible deal for himself in America, landing him a contract with David O Selznick. His absolutely best work was still in the future, but this picture was an important keynote in establishing him as a major Hollywood player.

If anyone has stumbled across FOTB on Christmas Day, may I take this opportunity to wish you the very best of Christmases, and thank you for visiting.