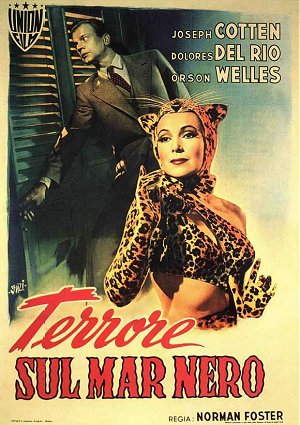 For me, one of the most interesting aspects of Orson Welles’s career in film is that it’s one big missed opportunity. We have one unimpeachable classic, several really fine works, many pictures suffering from budgetary restraints and, throughout, victims of the editor’s scissors. Just think what his legacy might have been like had he been appreciated at the time in the same way as we love his work now.

Take Journey into Fear, which like The Magnificent Ambersons was cut to such a swingeing extent that footage of the bigger picture simply cannot be found. Whilst Welles claimed to have played no part in the film beyond his supporting role and helping out in both production and script departments, one only has to watch Journey into Fear to see his presence all over it. His excuse was that he was mainly engaged in The Magnificent Ambersons and simply didn’t have the time for anything else, but it’s clear he put a lot into it, mainly working unpaid, in the evenings and in post-production. The scene most cited as having Welles’s signature is the thrilling finale on a dangerous high ledge, I think because it’s the film’s best known, but you get it also in the use of camera angles throughout the shooting, the then unconventional method of filming a character disembarking the ship from below, forcing the perspective of the man descending into peril. Another iconic bit of shooting comes in the opening scenes, the camera floating up into the apartment of a man who’s getting ready to leave. The character’s an assassin, an unlikely tub of lard who doesn’t speak during the film but plays the same record over and over, a disc that has obviously been played many times due to the number of scratches and jumps, something that doesn’t bother him as he goes about his business.

Otherwise, Journey into Fear is credited to Norman Foster, one of those reliable B-movie helmers whose extensive list of credits include a number of Mr Moto and Charlie Chan flicks. Joseph Cotten, also the film’s star, gets the main script writing credit, though Welles had a hand in this also as the pair adapted an Eric Ambler novel for the screen. Journey into Fear clocks in at around the 69 minute mark, satisfying RKO’s demand for a B quickie, and there’s an awful lot packed into the economical running time, but what’s fascinating are the clear signs of a longer and fuller picture. The film’s set in contemporary Turkey. Cotten plays Howard Graham, an American arms engineer who finds himself the target of Nazi agents. To keep him alive, he’s packed onto a ramshackle freighter without his wife but in the company of exotic dancer Josette (Dolores Del Rio). Graham’s neither happy about being separated from his wife, nor clear about what’s going on, indeed Cotten plays essentially the same character as in The Third Man, the near hapless man abroad, picking up on clues and titbits about what’s happening to him and relying – not always correctly – on his instincts for much of the time. What he does know is that the tubby silent man (played by Welles’s real life business manager, Jack Moss) has been hired to kill him, and when he turns up on the boat, trailing Graham Â incessantly, danger is never far behind.

The film’s at its finest when tracking Graham on the boat, suddenly cast into a world of peril and utterly swamped by circumstances. Every passenger is a suspect. The captain is a bedridden wreck who can’t speak English and cackles at everything Graham tells him. And then there’s Josette, who Graham fixes on through a sheer need for comfort. His narrative is a letter to his wife that urgently splutters on about his time with Josette meaning nothing and amounting to the same, but the implication of more than just walks along the deck together is strongly implied, and in fairness it’s difficult to blame him. Ruth Warwick brings a stately Americanism to her portrayal of Graham’s socially nailed on spouse, but Del Rio – Welles’s lover at the time – is just so uncontrollably sexy that one can believe how many of her scenes with Cotten wound up on the cutting room floor as RKO toned down a relationship that apparently dominated many of the film’s lost scenes.

What’s left is an uncomfortable and claustrophobic picture that plays best whilst on the boat and there’s nowhere for Graham to run to. It’s not always coherent as the need to trim the film left out some of its narrative tension, but as a minor Welles it’s certainly fine viewing and it helped define the template for film noir that would emerge in the post-War years.