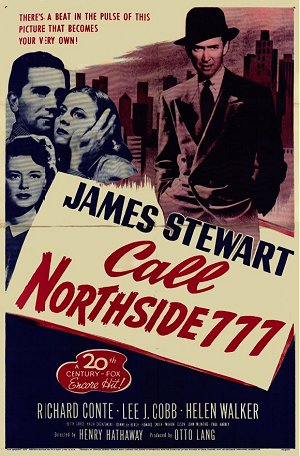 Apologies for both the lateness of this piece, and for the fact it’s going to be a bit rougher around the edges than normal. I should be doing a lot more justice to Call Northside 777, a film very much in the mould of The House on 92nd Street and Boomerang! thanks to its documentary style and factual basis. It was however my birthday yesterday – 40, if you must pry – and I wasn’t allowed not to celebrate – part of that involved going to the IMAX to see The Dark Knight Rises, one of those over-hyped, breathlessly well reviewed releases that fortunately lives up to the praise.

In any case, back to the 1940s and a piece that takes as its inspiration another true story, that of the imprisonment of two men of Polish descent, James Mazczek and Theodore Marcinkewicz for murdering a police officer in Chicago in 1933. Part of the Prohibition crime wave, the men were convicted quickly following the testimony of Vera Walush, the speakeasy owner in whose store the killing took place. Eleven years later, an advert placed in the Chicago Times for information about the real gunmen put reporter James McGuire on the case, which after much investigation into police corruption and the need to get a result led to Mazczek’s exoneration in 1945. Marcinkewicz was released five years later.

Louis De Rochemont may not have been credited for Call Northside 777, but the legendary producer’s fingerprints are all over its tone and style. Truman Bradley’s narration adds a note of authenticity, as does the shooting on location in Chicago and the rounded performance of James Stewart as PJ McNeal, the cynical reporter who nonetheless senses a story and develops it. Stewart got involved after his war service, which found the actor seeking tougher roles based less on idealism and more on hardened experience leavened by conscience.

The story follows McNeal as he attempts to gain a pardon for one of the killers, Frank Wiecek (Richard Conte). There’s a sense throughout the film that this will be no easy feat. More than a decade after Wiecek’s incarceration, it’s clear people would rather forget about him and move on, leaving the man an unfortunate victim of circumstance. Conte is brilliant as Wiecek. Whilst protesting his innocence, he carries a streak of fatalism that comes with serving so much jail time and knowing that at least he gained a fresh start for his wife and baby. Seeing the actor impress so strongly as the villainous Mr Brown in The Big Combo (reviewed excellently over at Riding the High Country), it’s great to see him play a more sympathetic role and fall in with the film’s gritty tone. In one of his standout scenes, he takes a lie detector test. It’s an important moment because it’s appreciated the audience may have no idea how such an exercise works, so time is taken to explain the process and show Wiecek in the chair, smoking and trying not to break the examiner’s request to answer simply ‘yes’ or ‘no’ to leading questions that demand more explanation. To add that final element of realism, the man playing the lie detector examiner was Leonarde Keeler, none other than the co-inventor of the actual polygraph.

Call Northside 777 was directed by Henry Hathaway, a reliable hand on such a project and someone who wouldn’t over-burden the narrative with melodrama or swamp the film in stylistic touches. It could be argued that Hathaway didn’t have to add much personality to what is a cracking, investigative story, and that he was able to get much of the tone he wanted simply through the use of location filming. Much of Polish Chicago looks dark and foreboding, never more so than when McNeal finally tracks down key witness Wanda Skutnik (based on Vera Walush) in a run-down part of town, a dimly lit apartment that reflects entirely the mentality of the hard-bitten character. Betty Garde is, incidentally, a study in nastiness as the skin preserving survivalist, Skutnik. Possibly better still is the scene in the Chicago prison McNeal visits, the long shot of the building’s cylindrical structure, pockmarked by hundreds of cells, which not only gives an impression of his ‘needle in a haystack’ chance of proving Wiecek’s innocence but also the hint of all those other stories hidden behind each austere cell door.

The film loses the human tension that came in spades with Boomerang! by never taking place in a courtroom. It’s the more administrative Court of Appeal for McNeal and his hard won evidence, within a piece that never lets pace get in the way of the tough and often frustrating investigation he undertakes. In the end, it relies on modern technology for its result. The polygraph is one example of this; the other is the photo enlargement process that ultimately turns out the best bit of evidence McNeal can find. Like the lie detector, it’s explained in detail and there’s something  almost comedic about the entire Court of Appeal waiting by the ink drum of the wire service for the picture that may or may not free Wiecek.

A good picture, not to mention a bold piece of work that has many negative things to say about the police force’s desperation to get a result after the killing of one of their own, a murder mired in a number of similar, unsolved cases. The lack of an orchestral score (Alfred Newman’s work, as I recall, only appears on the film over the opening and closing credits) shows its faith in the strength of the material and the people who put it on the screen.