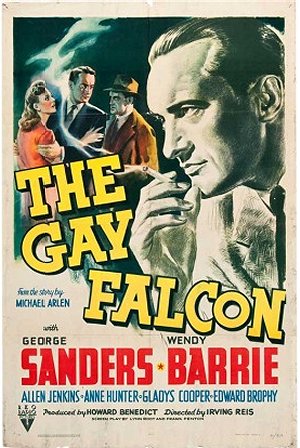 It’s great to see the BB-bally-C revive the tradition of classic movie serials over the summer holidays, first with the Saint films and now screening the Falcon series. There may have been some little known sporting event taking up the schedules beforehand, but we’re now into three remaining weeks of holiday fare, which raises the prospect of, well, what next? I can’t imagine seeing the decidedly non-PC Charlie Chan films make it onto the screens, but how about some Rathbone era Sherlock Holmes, or better yet, Weismuller donning the loincloth for his classic Tarzan adventures?

In the meantime, this week’s deal is two Falcon films per day, which makes ten in total, covering the George Sanders era in its first two days before Tom Conway (Sanders’s real life brother) takes over for the rest of the week. Anyone wondering what the difference is between the Saint and the Falcon can rest assured that there isn’t one. RKO simply needed to get Saint author, Leslie Charteris, off their backs as he protested with each release over the studio’s treatment of his stories and Sanders being quite wrong for his vision of Simon Templar. The Falcon is based on a short story written by Michael Arlen. With the adaptation rights bagged and RKO able to spin numerous flicks off from Arlen’s yarn, Charteris and his complaints were removed from the agenda, though he did sue the studio for their sheer cheek in repackaging the Saint. The matter was settled out of court.

As for the first film in RKO’s new franchise, The Gay Falcon is a short (it runs around seven minutes past the one hour mark) and bubbly concoction, and joyously naive when watched through jaded 2012 eyes. There’s that title for a start. Arlen’s story was named The Gay Falcon because that was the moniker of his protagonist. RKO kept the Gay but gave him the new surname Lawrence, whilst the Falcon remains as a shadowy, almost superhero nom de plume. As in the Saint pictures, The Gay Falcon is more about the lead character than the mystery in which he’s involved, indeed it’s a little weaker because the crime yarn is undercooked, as though all the scriptwriting effort went into developing Mr Lawrence. For all that, the police with whom Gay has an antagonistic working relationship are generally dullards, though not as daft as dim Jonathan ‘Goldie’ Locke, his hangdog sidekick. And then there are the dames. Gay’s a real ladies’ man, spending the film stringing along Wendy Barrie’s plucky amateur sleuth whilst being perfectly abominable to long-term squeeze, Elinor (Nina Vale). The latter’s flinty approach to Gay suggests she’s been treated exactly the same way for some years, but can’t resist him once he fixes her with his attention.

The whole show rests on Sanders, who floats through the film, just like the Saint in the knowledge he’s one step ahead of everyone. Gay’s such a fantastic character, breathed into life by the almost purring lilt of the actor’s plummy vocals that he’s eternally watchable. It’s both fortunate that RKO were able to drag so much work out of him in the space of several years, and a real shame Sanders believed the role was beneath him. No one says ‘Call me Gay’ better. Almost as good is Allan Jenkins as the wisecracking Goldie. Jenkins enjoyed a long career as a supporting actor, appearing in 150 films and TV shows and revelling in the fact that in each one he played basically the same character.