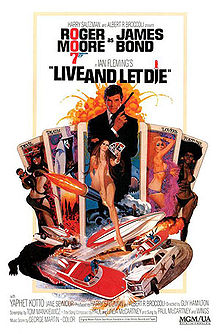 For Live and Let Die, Broccoli and Saltzman tried the usual bribe to get Sean Connery back into Bond’s tuxedo. The traditional unprecedented fee was offered, but for once the Scot turned them down and ensured a new face as 007. American actors were strongly considered. Robert Redford and Paul Newman both figured. Burt Reynolds was a rather unlikely frontrunner, before the producers resolved to go British and returned to a previously shelved option. Roger Moore had been in the frame on the two occasions that Connery and George Lazenby won the role. A veteran of television thrillers and with nearly thirty years of screen acting behind him, Moore got a haircut, lost some weight and strolled into the part.

Considering the direction taken by the franchise with Diamonds are Forever, Moore was an eminently suitable choice. Arch, knowing and with his tongue permanently wedged in his cheek, 007 and he were perfect bedfellows. Even the name ‘Roger Moore’ is an innuendo worthy of Tom Mankiewicz’s pithy pen. Over the years, Moore would come to spend far too long in the part and was present for some of the series’ weakest entries, but he was the Bond I grew up with. He was my Bond, in the same way that Tom Baker was, and always will be, my Doctor Who.

Back in the day when televised film premieres counted for something, Live and Let Die’s UK network debut in 1980 was a big deal. 23.5m watched it and the new Bond. Moore brought a light touch to the role. He explained that he deliberately tried to distance himself from Connery’s interpretation, and this wasn’t just down to his choice of alcoholic beverage or a preference for neckties. There was his more comedic, mock-deferential attitude to M, the friendly flirtiness with Miss Moneypenny (which seems mutual, whereas I got the impression she would have jumped Connery in a heartbeat). Whereas the old Bond brought a sadistic touch to the way he dealt with his foes, Moore looked as though he found the whole killing business slightly distasteful. He’d do it, for Queen and country of course, but he didn’t have to like it.

Live and Let Die is a better film than Diamonds are Forever, and that’s because Moore fits more easily within the overall tone. The serious spycraft of older entries was ancient history. All the film offers is a thrill ride – jump on and have fun! There are stunts, crocodiles, sharks, a speedboat chase, girls, Voodoo… What’s not to like? Moore is good at this sort of chicanery. The raised eyebrow from his Saint days might be kept in check here, but it twitches fiercely as the agent floats through the action, placed in perilous situations with the caveat that he’ll never suffer any serious harm.

Scraps remain from Fleming’s source novel, and the character of San Monique dictator, Dr Kananga, is an invention of Mankiewicz’s screenplay. As it turned out, Kananga was ‘born’ as the production team scouted for locations. Coming across a crocodile farm in Jamaica, they learned it was owned by a certain Ross Kananga, who not only lent his name to the film’s main baddie but also performed the famous crocodile jump stunt. The gate to his crocodile farm carried an ominous warning – ‘All Trespassers will be Eaten’ – which makes an appearance in the film.

Live and Let Die was made at the height of Blaxploitation. At one point, Bond enters Harlem and, while the very appearance of a well dressed English gentleman in Manhattan’s ‘black’ district would be sensational enough, is subjected to a slew of jive talk, some of which is jaw droppingly awful and horribly dated. Amidst all the honky catcalls, he comes across the picture’s main love interest, Solitaire, who’s played by Jane Seymour. Dr Quinn and endless appearances in TV movies and mini series were still some way off, and Seymour is virginal loveliness, indeed her ability to read the Tarot is linked to her maidenhood. This is before Bond enters her life, of course, and ends all that nonsense via a ridiculously obvious card trick. Julius Harris plays Tee Hee, the henchman with a robotic pincer where his arm used to be, and then there’s Mr Big (Yaphet Kotto), the underworld kingpin who has minions on every corner. A fantastic sense of danger follows Bond as soon as he sets foot in the States. His every move is relayed to Mr Big by walkie talkie carrying drones on each street corner. The driver taking him to Felix Leiter (David Hedison) is shot while the car is still moving. He sits in a bar alcove, only to find it’s a trap! It’s a shame the threat of Mr Big turns out to be so limited, no match for 007’s skills, yet the implication is quite thrilling.

Less so is the film’s set piece special, a speedboat pursuit on the Louisiana bayou. Bond pulls every trick in the book to elude his pursuers, leading to a stunt-packed ride for viewers, yet it’s actually a little dull and lasts far too long. The whole thing is soured further when a local sheriff gets involved. J.W. Pepper (Clifton James) is the stereotypical Deep Souther, hauling a pot belly in his fruitless efforts to catch up with Bond. Poor old J.W. Clearly inserted into the plot for nothing more than comic relief, his casual bigotry and evident stupidity are held up as reasons to dislike Live and Let Die (he also features in the ill-starred follow-up). That said, in a film where the bad guys are all black, there’s some credit in making a white man the butt of the joke.

The worst thing about the boat chase is that it seems the film has a Louisiana sequence just to showcase the scenery. Far better is Live and Let Die’s other pursuit, as Bond and Solitaire escape in a rundown double-decker bus, which becomes a single-decker after colliding with a low bridge. Better again is the voodoo business, just for its sheer daftness and fun with snakes. Rosie Carver (Blaxploitation veteran, Gloria Hendry) turns up as a treacherous CIA agent. Bond is on to her from the start, yet she meets her maker via a bullet shot from one of Kananga’s scarecrows, superb and scary devices that can be used either for spying or assassination.

Live and Let Die enjoyed massive box office success and sealed Moore’s future as Bond. It also guaranteed the steer of the franchise, locked in spiralling levels of silliness as the aim was to provide fun and thrills, moving 007 along to the next action scene as briskly as the exposition would allow. It works here, just about, though later entries would demonstrate that the balance between entertainment and plain daftness was fine indeed. As Moore makes quips about ‘A genuine Felix Leiter’ to his CIA liaison’s voice emanating from a car lighter, and agents are offed during ingeniously double-edged jazz funerals, it’s enough of a ride to forget the absence of John Barry. Perhaps it helps that Live and Let Die features one of the series’ best theme songs, performed by Paul McCartney and Wings, which is referenced frequently in the funked up score.