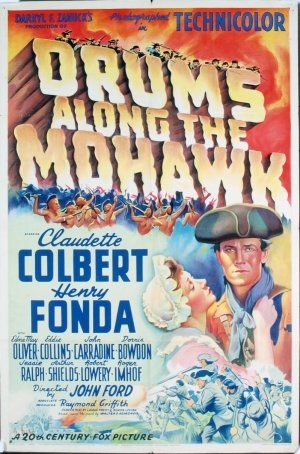 1939 really was the key year in John Ford’s development as a film maker. Turning to tales of American history for inspiration, he directed films covering late nineteenth century Western pioneers (Stagecoach), the events that helped build the character of one of the USA’s greatest presidents (Young Mr Lincoln), and Drums along the Mohawk, set in the Revolutionary era. Faced with the competition, and indeed that of Gone with the Wind, which dominated historical epics released that year, it’s tempting to see Mohawk as the lesser work, a footnote in Ford’s lengthy filmography.

Certainly, there’s little of the earnest melodrama present in Victor Fleming’s lengthy Oscar vacuum. Drums along the Mohawk is less than half the length of Gone with the Wind and presents its main characters essentially as stoical pioneers with a collective ‘make do and mend’ approach in the face of considerable perils. The impression should be obvious enough – the Mohawk Valley settlers represent the American spirit at its steadfast, dependable and redoubtable best. When any of the settlers’ homesteads is ransacked and razed by Indian raiding parties, they simply move on to the next free plot and start all over again. At the film’s close, Henry Fonda turns to Claudette Colbert and tells her they’d ‘better be getting back to work, there’ll be a heap to do from now on’, which comes after a stirring, flag-raising sequence and sums up the idealised American mentality at its finest, indeed Fonda and Colbert’s characters are really nothing less than Mr and Mrs USA. He’s reliable and firmly believes in doing the right thing. She shows a fierce determination to rough it in the cause of standing by her man.

That these sentiments don’t melt the film into hopeless sap is a mark of Ford’s greatness as a storyteller. There’s a considerable effort to show the progress of Fonda and Colbert’s newlywedded settlers as something that happens organically rather than according to narrative conventions. Especially touching is their arrival at the log cabin he’s built, the first time Colbert’s seen it. It’s pouring down and the humble little house looks a world away from the fine living she’s enjoyed in Albany to that point. The arrival of Christian Native American, Blue Back (Chief John Big Tree) to welcome them is the final straw. Colbert gets uncontrollably hysterical and Fonda has to slap her in order to shock her into calming down. Blue Back promptly returns with a switch so that Fonda can maintain household discipline, but it’s clear he’ll never need to use it. Their love is too strong. Her despair is fleeting. Despite its lowliness, the cabin becomes an earthly paradise for the young couple, who are soon seen happily farming and planning their future together.

The film never quite manages to convey the loneliness and sense of great distance that tortured real life settlers, instead portraying the loosely dotted community as happy and there for each other, gathering at the fort for square dances, assemblies of the local militia and forging friendships. Prominent amongst them are Ward Bond’s eternally cheerful Adam Hartman, and Edna May Oliver as widowed landowner, Mrs McKlennar, who lets the young couple move in with her and help out when their home is torched. Oliver’s salty attitude steals the show. When it’s her turn to suffer an Indian raid, she forces her invaders to help her move the bed out of the room they’ve recently put to the torch.

Given the political realities of 1939, Drums along the Mohawk is careful not to cite the British as outright villains, instead labelling the American Tories with the ‘bad guys’ motif. This has some basis in the actual history of the Mohawk Valley. It was invaded by Colonel St Leger as a diversion to the main attack on Albany, much of the fighting carried out by Indians in the pay of Tory, Guy Johnson. In the film, Johnson becomes Caldwell, an eyepatch-wearing wrong ‘un played by John Carradine, who co-ordinates the attack on the fort, which during the exciting climax is defended by the local militia.

This follows the militia’s mobilisation and departure to aid the Revolution’s war effort. Ford’s focus remains on the women, the agonies they experience in waiting for their men’s return and inability to get any news in advance. When they eventually make it back, ragged and riddled with injuries, the reunification of Colbert with Fonda is an incredibly touching moment, due in no small part to the care in which Ford has shown their growing love and the pair’s on-screen chemistry. Rather than lavish money on filming an actual battle, Ford has Fonda relate his personal experiences to Colbert, which he does in gory, minute detail. Famously, the scene was filmed by the director asking Fonda questions and getting him to improvise his answers while remaining in character.

Fonda also carries off one of the film’s most blazing scenes, when he leaves the besieged fort to seek reinforcements. Pursued on foot by Indians, the chase lasts an entire day, Ford getting in some brilliant shots of the runners silhouetted against vast, dramatic skies. This was the director’s first colour film, and he took advantage by creating a gorgeous palette, never better looking than in the lengthy chase.

Drums along the Mohawk is simply a wonderful slice of entertainment. Both the director and his main star did more celebrated work together and Gone with the Wind took the plaudits for historical drama shot in colour, but the effort here to create a seldom seen part of American history on screen is beautifully put together, rarely gets overwhelmed with mawkishness and gives its female characters something to do beyond waiting for rescue. Colbert’s character grows visibly; as the Indians invade the fort and break into the room where the women hide, she waits for them with a loaded musket. Her development from the spoiled girl who cries at the sight of a Native American could hardly be expressed more clearly.