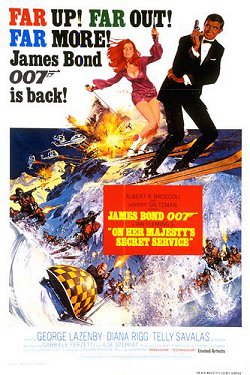 The one that doesn’t have Sean Connery in it turns out to be one of the best entries in the Bond series. On her Majesty’s Secret Service feels like the black sheep of the Broccoli-Saltzman family, basically because it starred George Lazenby, appearing in his sole Bond flick and – Diamonds are Forever aside (which, in fairness, is where it belongs) – splitting the Connery-Moore eras.

Worse still, a leaner box office return than previous films experienced pretty much did for Lazenby. By then, he’d already resigned on the advice of his agent, who suggested Bond was an anachronism in the era of Easy Rider. This made him an easy target for those within the production who were looking for someone to blame. Rather unfairly cited in a number of anecdotes as taking advantage of his new-found ‘big time’ status, the Aussie’s stint was viewed as a disaster and had a line drawn firmly beneath it once Connery was persuaded (with lots of money) to return to active duty. So much for the actor and so much indeed for the film, which was treated like the Bond we’d all rather forget about for some years after.

But missing it for this reason would be a huge mistake. The meaningless thrills of Thunderball and You Only Live Twice were set aside in favour of an attempt to return 007 to his literary roots. Peter Hunt, who’d edited the first three films and served as second unit director on the next two, finally made the step up to the big chair with an agenda to try something different. This meant a film that followed the book more closely than before and a Bond who showed distinctly human qualities, not least falling in love and getting married. There’s a noteworthy lack of gadgetry, meaning he has to rely on his wits and skills in times of peril. The action mostly takes place in the Swiss Alps. Blofeld’s (Telly Savalas) lair seems to be on the roof of the world, in reality a revolving restaurant in the Bernese Oberland. But this is an Ernst Stavro with the kind of balls utterly lacking in the insipid performance of You Only Live Twice’s Donald Pleasance. Savalas is dynamic and charismatic, capable of making people follow him in his wicked schemes through sheer force of personality, whilst Pleasance just appeared a bit creepy.

The film features one of my favourite action sequences in any Bond film. Finally escaping from Blofeld, 007 has to ski his way all the way down to the village below, an amazing sequence of stunt work and brilliant photography that called on the skills of ski racer Willie Bogner Jr and cameraman Johnny Jordan, who shot from a parachute harness that was suspended from a helicopter. Making it to the foot of the slope, Bond tries to elude his pursuers by blending in with the townspeople, only to suffer increased nerves and paranoia as they close in. For a moment, all he can do is sit down and wait it out, utterly defeated. It doesn’t last, but there’s a refreshing sense of Bond as a human being, one with limits that may be beyond yours and mine but finite all the same. It’s the hint of vulnerability that Connery rarely showed, particularly in his later films, and it works.

Throw in his declaration of love to Tracy (Diana Rigg) and the charm he has to use to get any girl, and it becomes clear this is a very different Bond to the ‘other fellow.’ Whilst Rigg is in fine form as a feisty heiress who’s worth the chase, it’s mostly down to Lazenby, who came to the project as a blank canvas and was willing to be shaped by Hunt into the Bond the director wanted. His is a sensitive portrayal, almost naive in its openness, and it makes for a great change. Hunt wanted to persist with him and make Diamonds are Forever together, beginning the film with the tragic event that closes On her Majesty’s Secret Service. But Lazenby was already gone and Connery had signed up, which ended the associations with the franchise of both actor and director.

What a shame, given the promising direction this one had in mind for Mr Kiss Kiss Bang Bang. It’s been suggested that On her Majesty’s Secret Service might have been the best Bond of them all had Connery taken the lead role rather than Lazenby. I prefer to wonder at what Diamonds are Forever might have been if Lazenby had stayed…