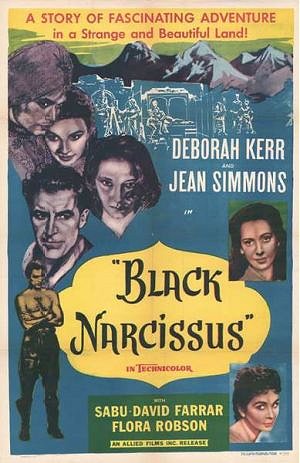 Exploring sexuality seemed to be an obsession of Michael Powell’s films. Some of his best work – Black Narcissus, The Red Shoes and Peeping Tom, the former two made with long-standing partner in celluloid, Emeric Pressburger – were studies of repression in its various forms. It was a brave subject to go into, and it didn’t always yield acclaim at the time, though all three films have attained treasured status in later years.

Black Narcissus is a joy from start to finish. Even if the subject matter – some nuns set up a convent high in the Himalayas and begin losing their way due to a combination of the climate and the culture – doesn’t grip, each scene is a thing of beauty. Cinematographer Jack Cardiff won an Academy Award for his work. Alfred Junge, who was responsible for the film’s design, was also Oscar-bound. Both were worthy winners. The luscious images and sensuous levels of colour load atop each other to provide a riot of visual appreciation. Whether it’s a shot of one of the sisters ringing the convent bell at the top of a vertiginous sheer cliff face, or the flowers, or the sunset viewed from a window, Black Narcissus is one of the loveliest looking films ever made.

Powell and Pressburger were working with a group of well known character actors who were all at the top of their games. Heading the sisterly order is Deborah Kerr’s Sister Clodagh, almost the image of sexual denial in the demure habit she wears throughout the picture (apart from in a few flashbacks). Like her sisters, Clodagh’s senses start going into overtime once she enters the convent, which was previously a harem for the local general’s women. Explicit artwork decorates the walls and a picture depicts the things that the women used to get up to in there. As though the building retains its memories of those days, the imagery works on Clodagh to conjure repressed memories of her own past and an old love, the ending of which compelled her to enter the sisterhood.

She isn’t the only one who falls under the spell of the ‘House of Women.’ Another sister who’s responsible for the gardens plants exotic flowers instead of vegetables. And then there’s Sister Ruth (Kathleen Byron), taken along because of her frequent bouts of illness. Already one bead short of a full rosary, Ruth becomes infatuated with Mr Dean (David Farrar), the charismatic British agent, which turns into a pathological jealousy of Clodagh as she suspects a latent mutual attraction between the pair. Added to the mix is Sabu, playing a young General who turns up to the convent to improve his learning but who instead falls for the earthy charms of a flighty dancing girl (Jean Simmons).

Incredibly, almost the entire film was shot at Pinewood Studios, matte paintings filling in for the Himalayan vistas. You can’t tell. It’s all so masterfully put together that you can almost feel the constant wind tugging at the sisters’ habits and smell the cool, clean air they blame for their emotional states. The colours are deliberately chosen and work wonderfully, especially the white of the nuns’ habits clashing with the exotic dress and flora they find themselves in, emphasising the sisters’ other-worldliness.

But the lasting image has to be that of Sister Ruth and her eventual fall into chaos. The way she goes from plain sister to glamourpuss and finally the pale-faced would-be killer of Clodagh is amazing. Her final scenes are terrifying. I’ve seen Ms Byron in many other features, notably The Small Back Room, in which she is once again partnered with Farrar. She’s a natural beauty. Yet every viewing of her in those other films takes me back to the sad, demented Sister Ruth, her mind lost to hate and vengeance. It’s a terribly affecting performance in a superb film.