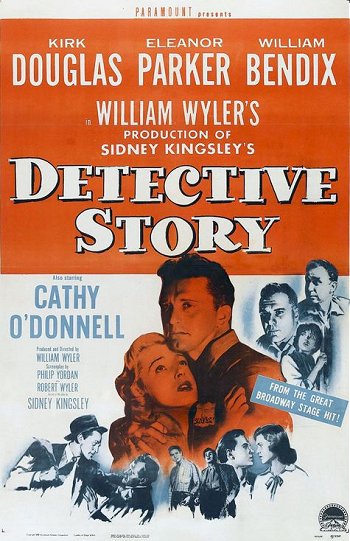 I’m drowning – drowning in my own juice…

The more times I watch films by William Wyler, the more it’s becoming apparent he’s one of my favourite directors. 90 Take Willie, a perfectionist renowned for filming scenes over and over until he’d got exactly what he wanted from them, might be better known for his three Academy Awards for directing, and for filming on vast canvases as in The Big Country and Ben-Hur, but Detective Story is an altogether smaller affair. Filmed almost entirely on a single set (the 21st police precinct in New York) and focusing on a day in the life of both the cops and robbers who frequent it, the picture’s an intimate portrayal of one man’s descent into despair.

At first, Detective Jim McLeod (Kirk Douglas) appears to have it all – the glamorous wife (Eleanor Parker) and uncompromising attitude to law-breakers. His policy of zero tolerance might very well make him the Daily Mail‘s perfect copper as he switches from case to case with crisp, almost insouciant ease. But there are flaws in his armour, witnessed by those around him (reliable character actors like William Bendix and Horace McMahon) who realise he’s a timebomb of hate and anger and spend part of their day trying to temper his force of nature. McLeod’s darker side rises to the surface with the appearance of Dr Karl Schneider (George Macready), an accused abortionist with the blood of many women on his conscience. The detective’s been trying to bring him to justice for a year and grows increasingly frustrated with his unwillingness to confess, beating him savagely on a trip to the hospital to visit a witness after Schneider suggests he has information that concerns McLeod himself.

That information turns out to concern Mrs McLeod in a story teased out by the detective’s boss, Lieutenant Monahan (McMahon). And here, McLeod’s thin veneer of self-control starts to unravel. His harshness to the mainly petty criminals brought in increases, notably to Arthur (Craig Kindred), a first timer who’s committed an offence of burglary against his employer. McLeod’s partner, Brody (Bendix), thinks that Arthur’s made a young man’s mistake and can be let off with a warning, but the detective’s having none of it, seeing Arthur as inevitably starting on a slippery slope that will lead him to the career criminality exhibited by two harder cases who’ve been brought in.

Detective Story is adapted from Sidney Kingsley’s 1949 play. Wyler uses his limited set to film from all angles, largely reflecting McLeod’s state of mind. The early shots are more controlled as he’s in calm control, concentrating mostly on the apparently endless series of cases brought to the precinct and the staff’s attempts to keep on top of everything. Later, the space surrounding Douglas seems to compress, shutting him in. The rooms he uses to talk with his wife become more cramped and claustrophobic, and it’s no surprise that the ‘talking to’ he gets from Brody takes place on the roof, the wide open cityscape at night mirroring the possibilities of a bright future he’s hearing.

The film relies on strong performances from its cast and it gets them. Douglas is at his most commanding, but there is time to explore the other lives and especially affecting is the turn delivered by Lee Grant, the petty shoplifter who’s being booked and from whose perspective much of the story unfolds. Grant was one of several cast members who reprised her role in the play, and she earned an Oscar nomination for her playing of the bewildered woman trying to cope with the dizzying blur of activity into which she’s been thrown.