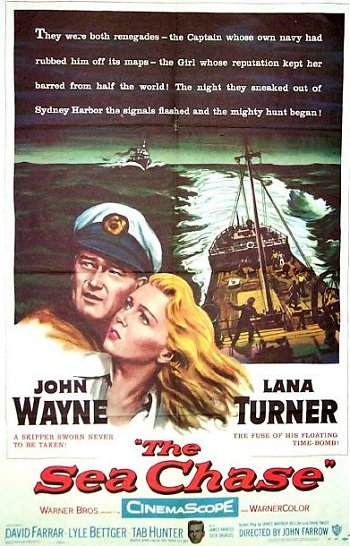 Those who watch The Sea Chase out of a sense of intrigue are likely to come away disappointed. Yes, John Wayne plays a World War II German, but it’s quickly established he’s no card carrying Nazi; he even orders his men to switch off a radio broadcast of one of Hitler’s speeches early in the film. The Duke is Karl Ehrlich, captain of a battered German freighter, the Ergenstrasse. As news of the war breaks, Ehrlich and his men are docked in Sydney. Here, the captain meets his old friend, Jack Napier (David Farrar), a British naval commander, who introduces him to his German fiancé, Elsa (Lana Turner). Napier passes on the warning that the Ergenstrasse’s crew may need to be interned, but worse follows with the revelation Elsa is a spy, her role to use her womanly wiles on high ranking British officials and pass on their secrets.

Soon enough, Ehrlich is sailing out of Sydney harbour under dead of night, with Elsa on board and Napier in hot pursuit. The British feel capturing the Ergenstrasse won’t be a problem. It’s a hulk, low on fuel and supplies and no match for Britain’s finest. But Napier knows different, dropping hints that Ehrlich is a far more cunning and able seaman than his current post suggests. The scene is therefore set for a cat and mouse chase across the South Pacific.

The Ergenstrasse’s first stop is Auckland Island, home of a remote supply base. Ehrlich sends his First Officer, Kirchner (Lyle Bettger) for the requisition, who subsequently comes across some marooned British sailors and kills them. Unlike his captain, Kirchner is a proper Nazi, which broadly translates into being a nasty piece of work. His slaying of unarmed man will have fateful consequences for the ship’s crew, and for its honourable captain…

The story was adapted from Andrew Clare Geer’s novel, which in turn was based on the real-life tale of the Erlangen, a German freighter that gave its pursuers the slip and eluded capture all the way to neutral Valparaíso, Chile. A yarn that has the potential for great suspense never quite exploits it in the film. The evil Nazi on board commits no further atrocities. A crew on the verge of mutiny as the ship’s slim resources tell on morale resolves its issues as Ehrlich’s noble spirit wins everyone over. The Ergenstrasse stops for some time on the uninhabited – and fictional – Pacific island of Pom Pom Galli in order to gather as much wood as possible for the voyage to Chile. Here it stays, unmolested as the British are forced to check every South Seas island for their prey, even though Napier knows where they are likely to have gone. This makes for a tension-free chunk of movie, scenes of sweaty crewmen chopping down trees barely plugging the gaps; neither does the lukewarm chemistry between Wayne and Turner.

The Sea Chase isn’t without some worth, however.  John Farrow’s leisurely direction explores every inch of the Ergenstrasse, minuting the life of its crew in fine detail. The response of the shipmates to the death of one of their own following a shark attack is moving. The slow turnaround of Ehrlich’s popularity with his men makes narrative sense. He cares for them, making it clear he wants to get them home safely. The relationship between Ehrlich and Napier is also satisfying. There’s a mutual bond of respect, and the pain of betrayal is clear on the British officer’s face as he learns of the Auckland murder (though not its real protagonist). Wayne convinces as Ehrlich, the captain rather than the lover, and how Turner escapes more than some lingering stares as she struts around the ship in figure hugging sweaters is entirely beyond this writer. A pity none of it is as exciting as the posters (‘He was a skipper sworn never to be taken! She was the fuse of his floating time-bomb!‘) and publicity suggested.