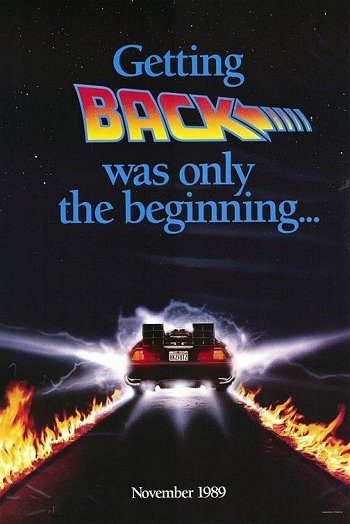 So just how exactly do you follow up one of the 1980s’ best loved family films? One answer is – you don’t. Steven Spielberg must have resisted offer after offer to return to E.T, thereby leaving his teary alien story a magnificent one-off. And rightly so, one might argue, considering there’s next to nothing a sequel could provide that wouldn’t somehow cheapen the format.

Another possibility is to expand the original concept in such a knowingly deep and complicated way that you produce a film dividing audiences to this day. Welcome to the dilemma faced by Robert Zemeckis in the wake of Back to the Future, which remains this writer’s favourite entry from that decade. The first instalment left itself wide open to a sequel, but there was also a sense that its ending merely suggested the wider possibilities of the time-travelling adventure rather than demand a second bite. So much of what happens in Back to the Future is self-referential that pretty much all the narrative loops are closed, making it a near-perfect two hours.

Still, box office receipts are mazoomah in the bank, and no one can blame them for wanting to return to the world of Marty and Doc. Viewers were generally favourable of Back to the Future Part II being made, with the added bonus that it would be a back-to-back production with the third and final chapter, widening the story to include both the future and ultimately the distant past.

Neither can anyone criticise the film for its lack of ambition. Bttf2 is nobody’s idea of a cheap, knock-off sequel. The possibilities of time travel are limitless, a theory the film latches on to gleefully with a yarn that rips through all three streams – the thirty-year gaps betwixt 1955, 1985 and 2015 – with breathless abandon. Its central thesis follows on from the lessons of the first – change something in the past and the future will be altered, sometimes to devastating effect. This is indeed what happens, as the film’s villain, Biff Tannen (Thomas F Wilson), now reduced to one of life’s failures, exploits the time travelling DeLorean to send a sports almanac back to his 1955 self and ensures he’ll always pick the winner, thus making a fortune. Marty (Michael J Fox) and Doc (Christopher Lloyd) have to put things right, but not before they get a glimpse of what went wrong – Biff’s naturally corrupt business empire, his continuous hounding of Marty’s mother, Lorraine (Lea Thompson) and slaying of father George. It’s a horrible and yet deliciously observed sequence in the film, reminiscent of the classic It’s a Wonderful Life in seeing just what might have been when something changes.

Elsewhere, the film runs at a pace slightly south of breakneck, piling up paradoxes and reference points to the first part as Marty chases 1955 Biff for the almanac, all the while trying to avoid running into himself who’s involved in the events of the original story. Phew. It’s cracking, and a shame that the set-up for the plot takes place in a 2015 that now looks dated and daft. The film fails to acknowledge a life-changing concept like the internet, instead serving up flying cars and hover boards, all fair enough given the time it was made yet a little out of step now. That said, the holographic Jaws is awesome.

Some of the cast are well served, others less so. Wilson is a hoot as the oafish Biff and Thompson makes for an adorable Lorraine, yet George appears in a vastly reduced role because Crispin Glover failed to agree terms with the production team, leading to a mix of archive footage and a hugely disguised Jeffrey Weissman lurking in the shadows to make up his contribution. Glover’s geeky playing was one of the first film’s biggest joys; his absence was felt. Glover sued the studio.

Worse still is the treatment meted out to Marty’s girlfriend, Jennifer. For Bttf2, she’s played by a pre-stardom Elisabeth Shue and quickly left to one side, because nobody seemed to know what to do with the character or wanted to risk disturbing the Fox-Lloyd dynamic. Zemeckis often lamented ending the first film on Jennifer joining Marty and Doc as they flew into the future. If only she’d been left behind. Then they wouldn’t have to short-change her with such a derisory part. As for Fox, he was well cast as a replacement for Eric Stoltz in the first film, yet by now he was well into his late twenties and starring elsewhere in a string of more adult-orientated roles. Still playing a teenager (indeed the second film picks up directly after the first), he looks his age.

And so, to an extent, does the film, broadly considered the least of the three. Personally, I think it works much better than the last instalment, in which the time travelling element was dialled down in favour of playing it as a western. But it isn’t as good as the first one (what is?), which begs a return to the question – was the sequel a mistake? One clue may be that whilst a follow-up to Who Framed Roger Rabbit? Is constantly being mulled over, Zemeckis has not since directed anything that has a ‘2’ on the end of its title.