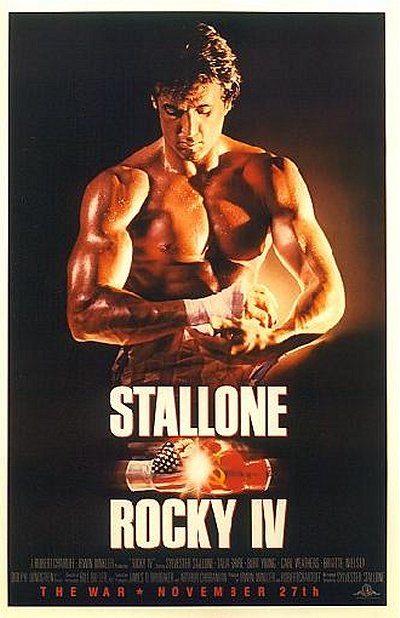 I was reading a cracking article at Den of Geek recently that advised how I could tell the film I was watching had been made in the 1980s. One of the tell-tale signs was the use of musical montages, which I guess was a trend arising from the impact made by MTV. Reading it, I found myself transported back to a series of mid-eighties movies, some caught on our Betamax home entertainment breezeblock, but many at the local fleapit (which, I’m happy to report, still exists). The Karate Kid was stuffed with montages, my favourite being the one accompanying Bananarama’s Cruel Summer because I liked the song. Another was Mannequin, a roundly terrible feature that I think I went to see on a date and, worse still, insisted on actually watching the thing. What a catch, huh?

And then there’s Rocky IV, a film that in reality consists of little more than the most wafer-thin of plots strung together by montages. Here’s a spoiler-free guide to what happens in it:

In between, we get a series of flashbacks to episodes in Rocky’s life, culled from the first three films and intended to peer into our hero’s tortured mind as he contemplates his epic struggle with the Russian. The likes of Survivor and other MTV-friendly turns are piped onto the soundtrack to give these clips shows some momentum, but it’s scurrilous and cheap film making. Later, more pumping music plays to the shots of Rocky training for his big fight. Exiled in the Soviet Union, watched constantly by KGB heavies and cut off from the outside world, he goes back to basics in building up his strength, which is juxtaposed with shots of the Russian using the most high-tech equipment, not to mention dining on steroid injections to boost his freakish strength.

Rocky IV was made as Reagan’s America hit the heights of its Cold War revival. Far from being portrayed as the country falling into economic chaos that it really was, the USSR was depicted as an unknown superpower, capable of anything and intent on bringing down the democratic west. In hindsight, it was an incredible attitude to have mere years before the collapse of the Iron Curtain, but it was the party line at the time and Sylvester Stallone conjured a yarn to match.

It’s jaw-dropping stuff. An early tagline for the film was Get ready for the next world war. The film’s opening shot showed two boxing gloves painted in USA and USSR colours colliding into each other. The Russian boxer, played by Dolph Lundgren, and his promotion team (one of which includes Brigitte Nielsen) are cast early as baddies, overshadowed with ominous, foreboding music. In the promotional fight between Lundgren and Rocky’s friend, the washed up Apollo Creed (Carl Weathers), it’s clear what’s going to happen, yet the film pads out the inevitable with a jolly James Brown tune, which then juxtaposes to jarring effect with the joyless build-up to Rocky’s fight in Moscow. Of course, Rocky’s indomitable spirit is what matters in the end. He wins over a previously partisan Russian crowd and finishes on a speech of such incredible pomposity and bloody cheek that even the Politburo (led by a shadowy Gorbachev) start applauding. It seems the spirit of Glasnost started here.

Even the things the previous films did well i.e. the fight scenes, have been reduced to cartoon violence, with little inherent logic to them. The two fights in Rocky III made sense as Balboa took on Mr T’s Clubber Lang before and after his new and improved training regime and fresh determination. In Rocky IV, watch the pummelling dealt out to our hero. At around the same time as this film came out, a young heavyweight boxer called Mike Tyson was laying waste to every opponent on the way to his title. Many of his wins came via first round knockouts, yet the punishment he meted was as nothing compared with the licking Rocky takes here, and unlike Iron Mike’s victims Balboa comes back for more. Because that’s what America does, right? Gets back up and dishes it back? Yeah right.